I’m pleased to welcome Tom Williams back to my site today to talk about his brand new novel. This is the second historical adventure novel to feature the Eighteenth Century British spy, James Burke- Burke and the Bedouin.

Over a century and a half before there was James Bond, there was James Burke. The British Secret Service has been around for a long time. Many people date the start of an organised intelligence service to the reign of the first Elizabeth, though spies and spying will have been around much longer than that. By the time of the Napoleonic Wars, Britain took spying very seriously. James Burke was a real person. He was an army officer, who had started his military career fighting for the French, which was perfectly acceptable before Britain and France were at war. Moving to the British Army in 1793, he spent most of his career from then on engaged in espionage. We know that he spied in Argentina, and his activities there are the basis of my first Burke book, Burke in the Land of Silver. The events there (where he seduces a princess, a queen, and the mistress of a Viceroy) are, amazingly enough, closely based on fact. For his second outing, though, I’ve allowed my imagination free range. In 1798, Napoleon invaded Egypt. The French love to write about their wartime exploits, so we have a lot of detail of the invasion by people who were there. This provides the factual background to a wholly invented tale with an evil villain, a damsel in distress, moonlight rides across the desert, and ambushes and dirty deeds. It’s a lot of fun and you will learn something about history as well – including the Battle of the Nile, one of the greatest British naval victories. It’s up there with Trafalgar really, though not a lot of people seem to know about it these days.

1798. James Burke, British spy, is in Egypt. His task: to investigate the rumour that Napoleon is planning an invasion.  It turns out that the French are coming and Burke is too late to stop them. Undeterred, he works with the Bedouin to delay Napoleon’s soldiers while trying to get word to the British Navy so that they can destroy the French fleet. He’s got enough on his plate without protecting Bernadita, the Spanish slave he rescues from her cruel master – but Burke can’t leave a damsel in distress, even with hired killers on his trail …  Set against a meticulously researched background of the Napoleonic Wars, Burke’s adventures reach a dramatic climax at one of Britain’s greatest naval victories, the Battle of the Nile. 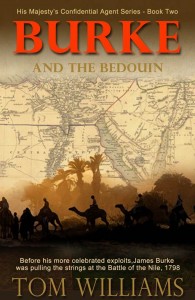 Have you ever noticed how many authors are described as ‘reclusive’? I have a lot of sympathy for them. My feeling is that authors generally like to hide at home with their laptops or their quill pens and write stuff. If they enjoyed being in the public eye, they’d be stand-up comics or pop stars. Nowadays, though, writers are told that their audiences want to be able to relate to them as people. I’m not entirely sure about that. If you knew me, you might not want to relate to me at all. But here in hyperspace I apparently have to tell you that I’m young and good looking and live somewhere exciting with a beautiful partner, a son who is a brain surgeon and a daughter who is a swimwear model. Then you’ll buy my book.

I street skate and ski and can dance a mean Argentine tango. I’ve spent a lot of my life writing about very dull things for money (unless you’re in Customer Care, in which case ‘Dealing With Customer Complaints’ is really, really interesting). Now I’m writing for fun. If you all buy my books, I’ll be able to finish the next ones and I’ll never have to work for the insurance industry again and that will be a good thing, yes? So you’ll not only get to read a brilliant novel but your karmic balance will move rapidly into credit. 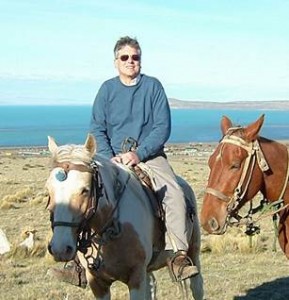 Thanks Tom! You can go and hide again now!!