With two days passed now since returning from the premiere of the new Robin of Sherwood audio production, The Knights of the Apocalypse, the daily routine of life has settled, and my next novel is getting a little more of the attention it needs if I’m ever going to reach the deadline. Before I get back on with reality- or my version of it at least – there is time for one more #KOTA blog. 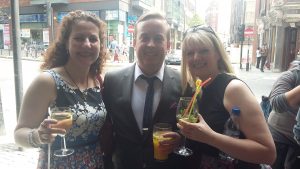 The title of today’s blog is well chosen.

I have taken many things away from the #KOTA premiere; the most enduring feeling however- and I’m aware this is going to sound twee – was the sense of gratitude, of friendship, and of pure joy. 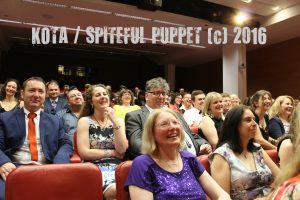 Sat in the audience for the show, watching everything happen around me as I always do, I was struck once again that the actors before me were not just a group of people who were doing their job. These were men and women (well, woman really), who were friends. Some of them have stayed in the acting business, others have branched into other related disciplines, while some have moved on completely, but they have remained friends. That love and loyalty to each other came over in the piece of audio art they (along with Iain Meadows from Spiteful Puppets, Barnaby Eaton-Jones, and the brilliant producer, Robert Young), have created. 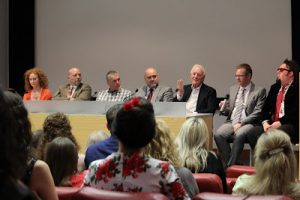 It was during the Q&A session after the premiere had been aired, that this strength of friendship and camaraderie came across most of all. As the audience fired questions, the laughing actors on the stage revealed that, with the exception of Peter Llewellyn Williams (Much) – who was most put out at being the only honest one amongst them- had permanently ‘borrowed’ things from the set.

Judi Trott (Marion) keeps Marion’s hair in  a plastic bag in the wardrobe, Jason Connery has retained some of his outfit, and Mark Ryan (Nasir) has umpteen swords and a throwing dagger above his fireplace in LA….

We learnt that one evening in LA, not too long ago, Jason and Mark rather overdid the whisky, and Jason challenged Mark to a sword fight…we were not privy to know the outcome of this challenge!

We found out that Peter does own more than one jumper- a relief to those of us who attended The Hooded Man event almost two weeks ago.

I also discovered that Peter, who usually works alone these days, had suffered a massively sore throat as a result of all the talking he did at The Hooded Man Event. (I’m the same- I talk to hardly anyone all day- by the time I got home late on Saturday night I was sounding most husky). 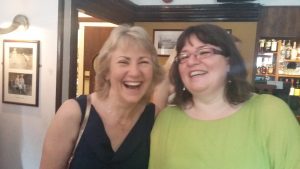 I found out that the lovely lady sat next to me in the pub after the event went to Leicester University with me- and was doing the same course! (small world indeed), and it was revealed that, as a group, the RoS fans are not the best singers, despite the efforts of one of our number to keep us in tune. 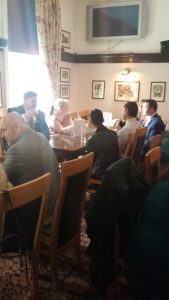 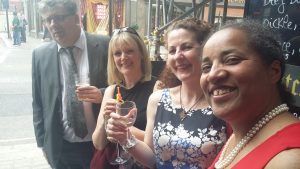 Before I go, thanks again…

To  Iain Meadows for his splendid sound production- and for taking the time to chat to me despite being up to his eyes in things to do.

To the cast who made everyone feel as if they’d known us all their lives.

To Barnaby for being such a fine wearer of red glasses.

To Kim for her most excellent photography.

And to you, loyal blog reader, for putting up with me going on about Robin Hood rather more than I normally do!