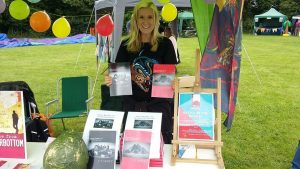 Greetings! Thank you Jenny Kane for the opportunity to talk about castles and dragons on your blog!

To start at the very beginning, Sammy Rambles is a ten year old boy who is being bullied at school. His parents decide he must change schools and by chance, they meet Sir Lok Ragnarok, headmaster of Dragamas School for Dragon Charming and things change very quickly.

In book one, Sammy Rambles and the Floating Circus, Sammy receives a dragon egg on his first day at school, which hatches into his very own dragon. But as he settles in and makes new friends, he learns of a dark fate hanging over the school. An enemy, known only as the Shape are trying to destroy all the dragons and close the school.

Not wanting to return to the bullies and his old school, Sammy sets about finding out who or what is behind the Shape and trying to stop them.

There are five books in the Sammy Rambles series and free sample chapters available to read at www.sammyrambles.com. Sammy has five problems to solve and he uncovers things about himself and his family along the way. Although the books weren’t written for a specific audience, I’ve had feedback that children as young as six are reading the Sammy Rambles books and their parents and grandparents are also enjoying the story, which takes place on multiple levels. Apparently, the oldest Sammy Rambles reader is aged ninety-six!

I wrote the whole Sammy Rambles story, around half a million words split over the five books, by hand, using pen and paper, filling many notebooks. As I’m not tied to a computer or laptop, I can write anywhere at any time and then type it all up later, preferably sitting on the floor beside the fire. 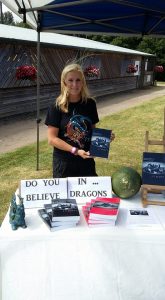 I used to write on my commute to work, in every room in the house, while walking around or sat on the sofa. There were times when it was too dark to write, so I bought a pen with a torch attachment and carried on writing. I even tried writing with my left hand as the ideas for the Sammy Rambles story, the characters, the plot and endless dialogue conversations just coming and coming and more than once I have fallen asleep with a pen in my hand.

Some of the characters definitely have traits of people I know, although no character is modelled on any one person. I remember sitting in a transport café and a father and his twin sons sat at the table next to me. The boys were being rather naughty jumping around the seats and backchatting their father. They were the inspiration for Sammy’s classmates Gavin and Toby. Some of Sammy’s teachers are loosely based on teachers I had, or would like to have had, at school. I challenge anyone not to have wanted Commander Altair as their housemaster.

At a recent ‘meet the author’ event, I was asked why Sammy was a boy and whether I had considered using a strong female role model instead. Looking back, I had many good role models, both male and female, if you look closely at the books, there are strong female characters, Sammy’s best friend, Dixie Deane, (who also has her own problems and story within the story). I have given Sammy’s mother a prestigious car and career as well as her caring nurturing side and a talent for baking iced buns and cookies. There are also strong female enemies in the stories so whether the protagonist was male or female, I feel I have a balance, even if it wasn’t something I consciously set out to achieve.

However, I definitely feel inspired to write about dragons, castles and mysteries and these are the types of books I enjoy reading the most. My favourite childhood books were by Alan Garner, Jill Murphy, Rosemary Manning, CS Lewis and JRR Tolkien. I spent hours on the Internet researching the etymology of names, places, delving into mythology, crystals and supernatural powers, which have spilled out into my writing. As the story progressed, I found I was writing about friendships, relationships, good times and bad times.

I didn’t set out to write a book of morals but there is the underlying theme of good versus evil and even the enemies have good traits which makes them harder to dislike. In Sammy Rambles and the Floating Circus these themes are introduced and I give the reader a flavour of the person Sammy will grow up to be. His wish “put wrongs to rights” is echoed throughout the series and it is not easy at times for Sammy to do the right thing.

I love visiting National Trust properties, English Heritage castles and taking long walks on Dartmoor. With a little imagination, you too could be driving down one of Devon’s narrow country lanes. Perhaps you are following a huge orange tractor like Sammy and his parents, and then suddenly, around the corner, there is a tall, towering castle complete with battlements, turrets and towers with flags flying from the top of the coned rooftops.

But, as in the books, not everyone believes in magic and not everyone can see the castle or the dragons flying around the turrets. 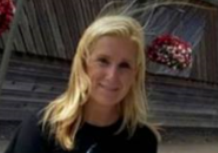 Thank you for reading this blog and I hope you believe in dragons. If you would like to read free sample chapters of the Sammy Rambles series, please head to www.sammyrambles.com. Or if you would like to meet at a Sammy Rambles event, please see www.facebook.com/sammyrambles. The Sammy Rambles books are available in paperback and Kindle versions and book one has just been released as an audiobook, recorded by Tracey Norman of Circle of Spears. The books are available on Amazon as well.

Many thanks Jenny, for such a great blog. Good luck with all Sammy’s exploits!

I’m pleased to welcome another first time blogger to my site today! The wonderful Sophie Croft is here to tell us about her debut novel, Indigo’s Dragon.

Over to you Sophie… 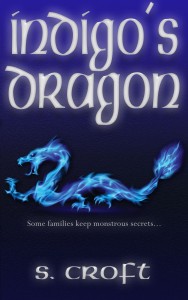 Thank you, Jenny, for hosting my first ever blog. I am delighted to be here, talking about my debut novel Indigo’s Dragon.

I thought I would start by answering the five questions I have most frequently been asked since the publication of Indigo’s Dragon.

What age range is the book for?

I don’t like this question! When asked it, I generally do one of two things:

What’s the book about?

Monsters, dragons … a boy called Indigo who goes on a journey and discovers some truths about his family that change him forever.

What inspired you to write it?

Lots of different things. In particular …

How do you find the time to write?

It is difficult. I have two young children who I home educate, and I also work from home as a tutor. Basically, I write whenever I can! I take ten minutes here … an hour there. Some of the early drafts of Indigo were written in pencil, in a notebook, by the side of the river while my children splashed in the water. I write when the children are playing contentedly, when they are watching a movie, or sleeping. Some days I get nothing done, other days I do. But I keep trying, because I love to write. 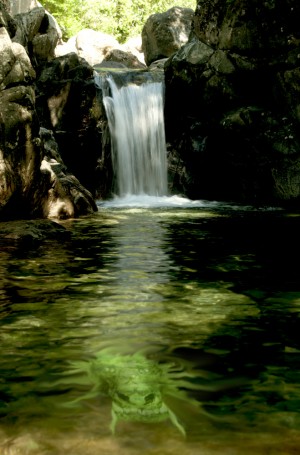 A Lake District dragon, hiding in one of my favourite writing spots.

(I must credit www.seenicksphotography.co.uk for this beautiful photograph)

How did you get published?

I sent Indigo’s Dragon to three carefully selected agents listed in the Writers and Artists Yearbook. Although one of them had some very positive feedback, they all eventually said something along the lines of ‘after careful consideration we are not able to offer you representation’. By the time the third rejection arrived I was already deeply involved in writing another book, and I shelved Indigo and almost forgot about it.

Then I heard Accent Press were starting a brand new YA imprint (YA Café) so I sent Indigo off, and a few days later I received a wonderful e-mail which began ‘Hi Sophie, I’ve read Indigo’s Dragon and I really enjoyed it!’

Having answered the questions I am most frequently asked, I would like to finish off by answering five questions I would much rather be asked:

Do you believe in dragons and monsters?

Yes, absolutely. Don’t you? Scientists estimate that over 80% of species are still undiscovered, and that is just on this planet …

Have you ever seen a dragon or a monster?

I saw them more often when I was younger, and my children see them more than me.

Are there many dragons in the Lake District?

Yes, several, although there are more in the Polish mountains.

Doesn’t the world have enough stories about dragons?

No. There can never be enough stories about dragons.

What are you writing now?

The third Indigo book. I finished writing the sequel, Indigo’s Demons, just before Christmas (hopefully it will also be published soon!) and have just started a third book, which might be called Indigo’s Ocean or Indigo’s Depths and will contain a sea monster or two. Writing it is proving to be a great way to relive some of the scuba dives I did in my youth. And on that note, I shall get back to work …

Fans of How to Train your Dragon, Harry Potter, and Percy Jackson will love the debut novel Indigo’s Dragon, a tale of adventure, mystery, and a legendary trip where he encounters a monster or two …  Indigo lives in the Lake District, and spends his time exploring the mountains he loves. An unexpected parcel arrives containing a first aid kit inside his grandfather’s satchel. Indigo’s curiosity is raised as he looks through his grandfather’s notebook to discover drawings of mythical creatures.  Strange things begin to happen and Indigo finds himself treating an injured magpie-cat, curing a cockatrice of its death-darting gaze, and defending a dragon. Indigo realises he must uncover the secrets his family have kept hidden, and travels alone to the Polish mountains to search for his grandfather and the truth.  Danger looms as events spiral out of control, and Indigo needs to make choices that change him, his world, and his future forever… 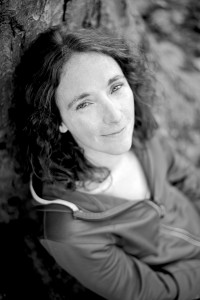 Many thanks Sophie- what a fantastic blog! I firmly believe in dragons!