Delighted to be joined by Chris Chalmers. Today, he’ll be giving us the low down on the inspiration behind his novel, Five to One.

Over to you, Chris…

Ask what set me off on the road of writing some of my books and I’ll waffle manfully.

Ask me about Five To One, and I can give you a definite answer.

Two, to be exact. Five To One is the story of the day a helicopter crashes on London’s Clapham Common, and how it affects the lives of the people who witness it. It’s not based on fact, thank goodness — though there was a helicopter crash a couple of miles away in Vauxhall a year or two later. But it was inspired by a couple of real-life incidents. 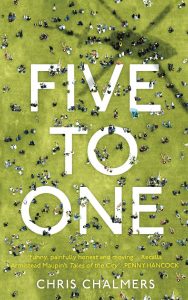 When I wrote it I was living in a flat overlooking the south side of the Common. My desk was at the front window, with a perfect view of the spot where, in my mind’s eye, that helicopter comes down at 12.55 on a fateful, blue-sky summer day. My flat was on a corner above an estate agents, and one night  the previous year I’d been in the kitchen cooking (read: microwaving) my dinner, when I was shaken till my teeth rattled by the loudest bang I’d ever heard in my life. The entire flat shook yet it was over in an instant. I ran to the front room where the main road divided me from the Common. Down on the pavement below stood a few dazed pedestrians looking on — and the rear end of a London black cab, sticking out of the shopfront.

My first thought was that the driver had had a heart attack. He’d clearly veered off the road, across the wide pavement and through the window. Mercifully the shop was shut at the time, and no one was seriously hurt including the driver. Police, ambulance and fire engine all appeared within minutes, and the whole incident soon felt completely surreal. As did the real cause of the crash when I later found out: the taxi driver had choked on a peppermint.

Needless to say the cab was extricated, the window replaced and within a couple of days there was nothing to show it had ever happened. Life moves on, and in London it moves on pretty sharpish. But it did set me thinking about those extraordinary instances when something happens we couldn’t possibly predict. I remembered a local news story from a few years before, when a wall collapsed killing a number of passers-by; ordinary folk on their way to work, or school or the shops. People who left home that day without the slightest inkling they were never coming back. That taxi went through the window at the exact spot you’d find me half a dozen times a day, fumbling for my keys or checking if I’d brought my phone. 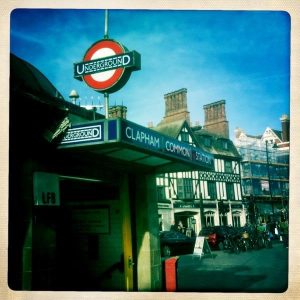 The other incident had happened a few years before. This one you might remember: it involved a minor politician and unseemly goings-on in the bushes of Clapham Common, in what was famously referred to as ‘a moment of madness’. Considering what politicians the world over get away with nowadays, it was pretty small stuff. But it was a big story at the time — and I remember the very odd feeling of sitting in bed one Sunday morning, opening the paper on a page-wide photo of the view from my window. It was the edge of the Common, with the sign bolted to the railings that read ‘CLAPHAM COMMON SOUTH SIDE’.

That was the moment when it dawned on me I subconsciously viewed all news — press, broadcast, and the then fledgling online variety — as fiction, or as good as. News wasn’t real; it was stuff that happened in a parallel dimension, with no relevance to me except as an intermittently engaging form of entertainment.

This news story, and later the cab that rattled me and my safe little flat to the core, were the impetus behind Five To One. It’s the story of Ian, Glory, Tony and Mari; four people going about their lives in a quiet corner of south London, when an utterly unforeseeable incident thrusts them into the spotlight and changes them forever. 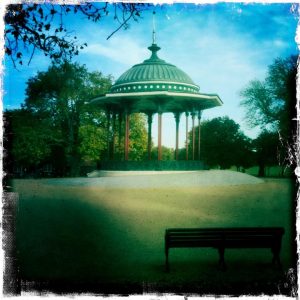 The opening line of the cover blurb says that ‘Every moment starts somewhere’. And that’s how the book begins — by telling the story of each of them, from the exact moment that will ultimately lead them to be on the Common just before one o’clock that afternoon.

Here’s one of them:

Extract from the first chapter of Five To One

Ian looked up from the compost. He hadn’t heard the back door open. It was Agnes, the nanny to the child of the house, standing on the garden path.

He wiped his hands on his vest. Shading his eyes from the fading sunlight, his fingers framed her in an aura that seemed entirely appropriate. It reminded him of tales of shepherd boys on lonely hillsides, visited by visions of the Virgin Mary and/or a very bright light. Except that the way this particular maiden was looking him over was rather less than virginal.

He’d seen her before: through the window preparing the child’s tea, and hanging out the washing in that lacy T-shirt that exposed her belly button to the breeze. But this was the first time he’d ever heard her speak.

‘Sparkler White-Tips,’ he said, breaking a foolish silence. ‘Top variety for the soil around here.’

Agnes nodded her mane of reddish curls as she opened her hand. Inside were two healthy round roots, cleaned and trimmed and ready to eat. She rolled them deftly, one over the other, like a tennis pro preparing to serve.

‘And they are werry good for childrens. They have a lot of witamins and also iron.’

Her flat, Polish tones pronounced it eye-ron, which to Ian’s surprise he found spectacularly arousing. As if her natural cleavage and the hipbones peeping saucily over her jeans weren’t enough. He leant on his spade to disguise a sudden awkwardness in his all-weather shorts. Watched, as she cradled the pinky-red balls a moment longer. Popped one in her mouth, and crunched.

Ian Newton was forty-seven. He’d run his own gardening business for eleven years, since a long-forgotten drop in the FTSE lost him the City job he hated. He preferred fresh air and being his own boss to watching screens and fielding calls from Tokyo. His friends joked about the temptations of bored, immaculate housewives, with nothing to do between school runs but sip espresso and wait for the gardener to get his shirt off. But the fact was, he’d never strayed. As a professional, a pessimist and a coward, he automatically assumed any husband would have hit-squad connections if he so much as left a bootprint on the stair carpet. So in all his years of marriage he had never seriously considered being unfaithful, even when Carla was at her most bloodyminded.

On a late May afternoon in the Wallaces’ back garden, when Agnes Skirowska smiled and chewed a second radish in the sunlight.

Half an hour later, with Jasper at his heels, Ian knocked the earth from his spade and tossed it in the van. Followed by one welly, then the other, swapping them for the moccasins he wore for driving. Another of Carla’s little rules – though God knows why he was sticking to it now …

The little West Highland terrier made a mountain of climbing in the passenger door, settling for base camp in the footwell rather than striking out for the summit. By the end of an afternoon, his dog was more tired than he was. Even the earthworms that once whipped him into a snuffling frenzy had lost their allure.

Not many summers left for the old team now, thought Ian, driving with one eye on the furry bundle. Jasper was highly impractical as a gardener’s dog. His white fur showed every sticky bud and bloodied raspberry that clung beyond the canine radar. On one occasion they had narrowly avoided a collision when Ian caught sight of that noble muzzle accessorised by a jaunty feather.

But on this day he looked without seeing. His fingers quivered and his armpits gave off an aroma a little like fear. They were signs of anticipation; of a man about to break new ground without working through the consequences. As they pulled out of Luther Road, Ian ran through his imminent schedule:

After every glance at Jasper, his eyes trailed back via the dashboard clock. Nine minutes to seven; just sixty-nine minutes to go.

They opened a fraction wider.

FIVE TO ONE – Blurb

A care assistant with a secret. A gardener with an eye for more than greenfly. An estate agent and an advertising man, each facing a relationship crisis. And a pilot with nowhere to land.

At twelve fifty-five on a sunny afternoon, five lives converge in a moment of terror as a helicopter crashes on Clapham Common. It’s a day that will change them all forever — and for some, will be their last.

‘A funny, often painfully honest and moving story about the absurdity of modern life and the concerns that propel us. Chalmers writes with a sensitivity and wit that recalls Armistead Maupin’s Tales of the City’ – Penny Hancock, bestselling author of Tideline

’A poignant study of genuine love in a big and fantastically diverse city’ – BytetheBook.com 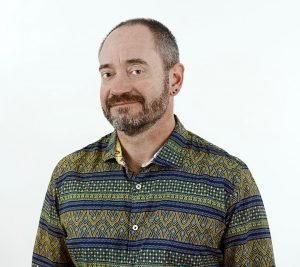 BUY LINK, paperback and ebook: (THE EBOOK IS ONLY 99p FOR THE WHOLE OF MAY)

Many thanks for coming by today Chris- great stuff.