A little while ago I shared a festive snippet with you from the sequel to my first novel, Another Cup of Coffee, – Another Cup of Christmas! Today I thought I’d share a little from this years festive story, Christmas in the Cotswolds!

Another Cup of Christmas is set in and around Pickwicks Coffee House in Richmond (on the outskirts of London), and five years have elapsed since the close of Another Cup of Coffee, and there are a few new faces to be spotted amongst the old, including Megan, the cafe’s new waitress. This year, my Christmas novella, Christmas in the Cotswolds, carries on Megan’s story exactly a year later- and this time, she is on her travels. 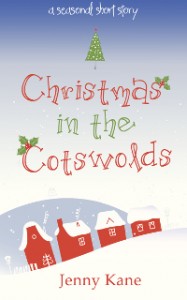 Got your feet up? Cup of tea, hot chocolate- or more appropriately perhaps, coffee, to hand? Right then…

Megan turned off the engine of the battered old car she’d borrowed from her boyfriend with a sigh of relief. Despite checking and double-checking her directions, she’d still managed to take a couple of wrong turns once she’d left the motorway and started to wind her way through the Cotswolds. Megan knew that if she’d been with Nick, every road she’d driven down in error would have added to the adventure, but on her own, after such a long drive, she’d begun to feel a little panicky and lost.

Now, outside the converted St Peter’s church, Megan climbed from the car, and was just taking in the frosty beauty of the picture-postcard sandy-coloured cottages, when she found herself the target of a beaming Izzie, who had enveloped her in a bear hug within seconds.

‘I’m so glad you came! Thank you so much, you’re a total lifesaver!’ Izzie, wearing torn and worn dungarees covered in plaster dust, with a bright red bandana covering her short cropped brown hair, took her friend by the hand and dragged her inside the church, ‘Come and see!’

Her fatigue evaporating in the face of her friend’s infectious enthusiasm, Megan allowed herself to be led through the arched doorway of the church into the porch, and drew in a surprised breath.

Megan had forgotten how cold churches could be, and immediately wished she’d put her coat on over her thick jumper and jeans. Wrapping her arms around her

chest she stopped in the medieval archway. ‘It’s stunning!’

What had once been the south aisle was now full of repositioned church pews and tables, which obviously formed the café part of the attraction. With a stained glass window reflecting coloured light across the space from both the right and left of the aisle, it felt both welcoming and peaceful at the same time.

The original font was still in position to the left of the doorway, and Megan could picture generations of babies being baptised there. Beyond the font was a rack which had presumably once held hymn books but now housed a collection of paperback books, newspapers, and magazines for the café’s visitors to read while they sipped their drinks.

‘Oh, Izzie, it’s fantastic! Where do you do all the cooking and sort the coffee and stuff?’

Izzie indicated to the right, where a wide door led into a separate room. ‘In the old vestry. It’s lucky for us really, nearly every other church has the vestry attached to the north aisle, but it’s on the south aisle here, nice and handy by the main door. There’s a little oven, serving hatch, and a baking area, although Mrs V does most of the baking at home.’

‘An angel in the flesh! Her name’s Mrs Vickers really, although everyone calls her Mrs V. She lives just around the corner, and is my chief cook and bottle washer. You’ll love her. She’s like the best grandmother ever.’

Wondering why Izzie needed her if she had the incredible Mrs V on side, but sensing there was more she had to say but wasn’t quite ready to, Megan asked, ‘Why isn’t it a church anymore?’

Flopping down onto the nearest pew, Izzie looked about her with pride. ‘The diocese couldn’t afford to run

all four of its Cotswold village churches so that, along with dwindling congregations, meant one of the local churches had to be given up. Criminal really, it’s so beautiful. Despite the ravages of the Reformation, a good deal of it dates from the fourteenth century. I could just sit here and admire the brickwork and stained glass all day.’

The more Megan looked, the more she could see what Izzie meant. There were still traces of the original wall paintings discernible on the walls, and the carving of the stonework in the nearest column was an artist’s dream. ‘Where will the choir be performing?’

Izzie’s smile faded, ‘I have a confession to make.’

Megan regarded her friend carefully; it wasn’t like her to hide anything. ‘Go on.’

‘Well, you know I said I had to do a bit of DIY on the roof before the concert on the twenty-first?’

‘I think it’s best I show you.’ Izzie led Megan out of the shelter of the south aisle and through the nave, before turning right and taking a few steps towards the chancel.

‘Oh my God!’ Megan’s hand flew to her mouth. ‘That is going to take more than a little bit of DIY.’

The floor was littered with a fine stone dust. A series of tools and brooms were propped up against the wall, and as the temperature dropped further Megan saw clearly exactly why the church felt even colder than she’d expected. A hole about half a metre square was thoroughly ventilating the old building, despite being covered with a sheet of see-through polythene. The presence of a very long ladder told Megan that someone had been shoring up the damage, but there wasn’t a workman in sight.

‘You haven’t been up there all on your own, have you?’

Izzie shook her head, ‘No. I’ve been doing what I

can, but a carpenter or roofer I’m not. There was a storm last week. A branch from the trees in the old graveyard decided it would like to crash through the roof. There was a carpenter here, but well … anyway, tomorrow there will be scaffolding going up outside so that a roofer can replace the tiles – if I can find one who’ll work this close to Christmas, but …’

Megan held up her hand, ‘Hold on a minute, Izzie. What do you mean there was a carpenter?’

‘His wishful thinking got a bit out of control.’ Izzie picked at her work-blunted fingernails. ‘Some idiot told him I was the local heiress and he decided to try his luck. He didn’t take kindly to my rebuff.’

‘You mean he got huffy when you told him he stood no chance?’

‘You got it.’ Izzie kept her eyes fixed on the space in the roof as she spoke, ‘It’s bad enough that my parents give me non-stop grief about being still single at twenty-six, without being hit on by every passing bloke the moment they overhear one of the locals ask after my mother. One mention of “Lady Spencer-Harris” and the carpenter became all airs and graces. Then, when he saw I wasn’t into all that stuff, he chanced his arm saying, and I quote, “Do you fancy a bunk-up in the vestry?”’

Megan rolled her eyes, ‘I imagine your response was short and to the point.’

‘Let’s just say my mother would approve of the language I used even less than she approves of me “playing at being a business woman”.’

Having met Lady Spencer-Harris on a couple of occasions when she’d visited Izzie during their college holidays, Megan had no problem imagining that she wouldn’t approve of her only daughter doing any sort of manual work, even if it was preserving part of the nation’s heritage at the same time.

‘So,’ Megan turned her back on the mess in the

chancel and examined the rest of the church, taking in the collection of craft equipment stacked up on a thin bench that ran the length of the north aisle, a collection of child-sized craft tables and seats lined up ready for use, and the tower, which looked mercifully intact from where she stood, ‘level with me. You have Mrs V in the kitchen, and there is no way, crisis or no crisis, you are getting me up a ladder, so what do you need me to do?’

‘Moral support!’ Izzie enveloped Megan in another hug. ‘It’s getting late. You must be starving and cold. Let’s lock up and go have dinner with my folks over with. I have a three-line whip order to bring you to the high table tonight.’

‘Oh God, really?’ Megan grimaced, ‘But I didn’t bring anything suitable to wear to one of your parents’ dinners.’

‘Don’t worry, I have loads of “please the parents” outfits; you can borrow one.’

Knowing she should have guessed she’d never have got away without a summons from Izzie’s parents, Megan nodded. ‘All right, you have a deal, but on one condition.’