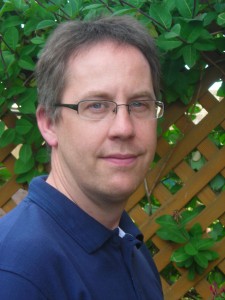 Hi, Jenny. Thanks for allowing me to invade your blog today, I really appreciate it. Let me tell you a bit about myself: I was born in Nigeria – to British parents – and now live in southeast England. After being a secondary school teacher for many years, I am now enjoying life as an author and editor. I recently signed a three book contract with the wonderful Accent Press for my ‘Gaia’ young adult trilogy, which begins with Pica, a novel of transformation and ancient magic.

My first success as an author came with my short stories, which can be found in many British and American anthologies and magazines. My collection of stories, A Glimpse of the Numinous, received a number of favourable reviews, including this one that I’m proud of:

“Reading is a form of escapism, and in Gardiner’s fiction, we escape to places we’d never imagine journeying to.” (A.J. Kirby, ‘The New Short Review’)

My first published novel was Myopia, a YA exploration of bullying and the non-violent responses to it. Igboland came next, which is set in Nigeria during the Biafran War, following a young English woman, Lydia, who is struggling with her marriage, identity and faith amidst the turmoil of conflict. Both these books were published by Crooked Cat Books.

My third novel, released by Tirgearr Publishing, is currently on special offer – only 99p/99c! Treading On Dreams follows Donny who becomes obsessed with his student housemate, Selena. She, however, is engaged to another and Donny has to cope with the dreaded spectre of unrequited love. Donny refuses to give up easily. Unrequited love is something that many of us can relate to. What do you do when the one you love says those cringe-inducing words, “I just want us to be friends”? Aagh!

I’d be very interested to hear any comments your readers have about those two themes: obsession and unrequited love. Has anyone out there got any good advice or tales to tell? Please do read the extract below and leave comments. I will endeavour to reply.

For more information see my website (http://www.jeffgardiner.com/) and blog (https://jeffgardiner.wordpress.com/) 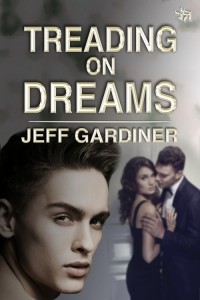 Here’s the blurb for Treading On Dreams:

Donny is obsessed with his housemate, Selena – but his love is unrequited. He enthusiastically accepts her willing friendship, which only fuels his deepening fantasies.

Jaz is their crazy landlord who likes sleeping with women – lots of them. He takes pleasure in educating the once innocent Donny in the hedonistic pleasures of sex, drugs and rock’n’roll. It blows Donny’s mind.

Selena is engaged to Melvin – the perfect man – but is also keen to befriend the ever-demanding Donny … until she falls pregnant and her wedding looms.

Donny expresses his true feelings at the wedding, causing mayhem and anger. But there remains a chink of hope: perhaps Selena’s marriage to Melvin is not quite as perfect as it seems.

An extract from Treading On Dreams:

‘Because I don’t particularly want to invite Donny, if it’s alright with you.’

‘But we were asked to invite friends and he’s my friend,’ Selena replied, to Donny’s delight.

‘That’s all I ever hear from you. Everything has to involve Donny. You must really feel sorry for the guy.’ Right outside her door now, he crouched, ready to pretend to be going to the toilet in case it should suddenly fly open.

‘Sorry. Wish I hadn’t mentioned it now.’ For the first time Selena spoke in a sarcastic voice, before.

‘If I didn’t know better,’ Melvin continued, ‘I’d suspect something was going on between you two.’

Melvin was jealous of him. How wonderful. After so much time and energy resenting Melvin this change of affairs came as something of a welcome revelation. Even better, she spoke about him constantly.

‘Don’t be ridiculous.’ She sounded annoyed. ‘It occurred to me that we should invite Donny to Tuesday’s meeting.’

‘I suppose the more people we evangelise to the better,’ Melvin’s voice admitted. Donny jerked back from the door. He wasn’t about to be groomed as one of Melvin’s religious conquests. But were Selena’s attentions part of some process to convert him? Perhaps her friendship was completely fake, with the sole intention of evangelising and converting them, like taking scalps. But no. Selena wasn’t shallow or conniving. Instead, he imagined her friendship to be a response to becoming disillusioned with Melvin. Had he worked a bit of magic and she was genuinely attracted to him, realising there were other men to fall in love with? How did she put up with what Melvin said? Donny left them to their squabbling and watched a DVD instead.

The next day he read long through the night and into the morning, until his eyes ached when he finally submitted and went down for an early breakfast. Hearing voices, he assumed Jaz had brought home a girl. However, to his surprise Selena and Melvin came into the kitchen to make some toast and coffee. Melvin did not normally stay over, but then Donny guessed they’d probably sat up chatting through the night until it got too late for him to go home. Eventually, Melvin made his excuses to leave and Selena saw him out. Because they took a long time whispering on the doorstep, Donny feigned aloofness and took his mug of percolated coffee upstairs. He sat in his room reading again, until interrupted by a light tap on his door.

He jumped up and opened the door. ‘Of course. I always allow beautiful women into my bedroom.’ She didn’t respond with her usual coy smile.

‘I need to have a chat with you, Donny. Is now a good time?’ She sat on the corner of the bed and he sat next to her, carefully cradling his drink. He was ready to say yes to the invitation to the meeting, because going would at least annoy Melvin. A long silence suggested this was not going to be her opening gambit.

‘Donny, I get this feeling you and I have been getting quite close recently and I’ve really enjoyed your company and friendship.’

‘Yes, it’s been wonderful. I love being with you.’

‘Well, I don’t think we should spend so much time together.’

Blood pumped in his ears and it almost deafened him. ‘Sorry?’

‘I only want us to be friends. I don’t want any more than that, Donny.’

‘Oh…no, okay.’ However, it wasn’t him speaking; he was a character in a corny film.

She walked out without looking at him or saying another word.

The phrase haunted Donny’s mind, echoing through the lonely darkness of each night: ‘I only want us to be friends.’ He imagined Selena saying it to him with her face warped into a mocking snarl.

After a while, the tablets started to lose their effect and waiting to drift into sleep was a tortured agony, but the more he thought about sleep, the more awake he felt.

How stupid he was to believe he had a chance with Selena. Scared of bursting into tears when meeting her, he avoided her for a few days, until one day he walked in on her making a cup of tea.

They both smiled politely but managed to avoid a conversation. He guessed they would no longer invite him to church meetings. Once Selena had made her drink, she quickly scuttled off to her room for the evening.

Donny struggled to put his thoughts together with his mind a jumble of loss, vulnerability, and dismay.

‘Women, eh?’ Jaz shook his head. ‘Don’t try to understand them, mate, that’s a mug’s game.’ Jaz sat opposite him in the snug bar of The Huntsman with two pints of Guinness each lined up before them. ‘My theory is that women fall into two categories: lizards and androids.’

‘But that’s the problem…she’s not either. She’s beautiful, intelligent, fun to be with and sensitive.’

‘You’ve got to stand back and realise she’s just another human being no better than anyone else.’

‘Or a lizard? Is that what you do? Discard anyone after the conquest.’

‘But then you never get into a relationship.’

‘Well—nor do you—but at least I get some satisfaction.’

‘I suppose I got too hopeful and wanted it so much. It would only end in agony or ecstasy and knowing my luck…’

‘Hate to say this, but you’ve got to forget her.’

‘And how am I supposed to do that then?’

Many thanks for visiting today Jeff – Treading on Dreams sounds great.