This week’s Opening Lines blog features a brand new anthology of stories  – put together by the Exeter Author’s Association – of which I am a tiny part.

The anthology, Tales from Deepest, Darkest Devon, features 19 different stories from 13 authors, all living in and around the county; from Brixham, to Tiverton, Ottery St Mary to Bampton, and many places in between. The stories cover a wide range of genres, and offers a story for every literary taste.

Devon; a land of beauty, of moors, villages and coasts. A place of stories, told by the people who live there.

Take a look beneath the surface of Devon with the Exeter Authors, nineteen tales from thirteen of the county’s finest writers.

Bobbing. Discover why revenge is a dish best served with cider,

Make a wish. Devon is the place to spend the rest of your life.

The Dartmoor Dragon. Discover the magic on the moor.

Winter Snow.  The old ways are the best

The Padding Horror. On the moors, an ancient evil is stalking its latest prey.

Under the Hunters Moon. You’re never truly alone on the moor

The Fairmile Green Man. Has Swampy and his protest been forgotten? A green man carving brings a much older story back to life. 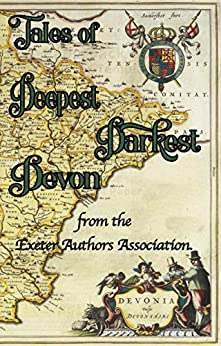 Part of the sale price goes to the Devon Air Ambulance Trust.

Here are the opening lines from my own story, Bobbing.

Feeling like a malevolent Eve slithering through the Garden of Eden, Libby did a slow twirl in the centre of the old cider barn.

The gauze dress was thin. It caressed her skin with a teasing arousal.

She was fertility herself.

If Robert hadn’t wanted her before, he’d definitely want her now. But then, if she was honest, that had never been a problem. Robert always wanted her. He always wanted everyone. And her boss usually got what he wanted.

The scrumpy’s pungent presence accosted Libby’s nostrils as she ascended the ladder propped against the eight foot high cider barrel. Empting two boxes worth of apples into the liquid, she watched as the fruit bobbed across the foamy alcoholic surface.

Smiling into the vat depths, Libby counted the apples, making sure there were enough for all the guests to have a go at capturing one with their teeth. Then, balancing carefully, she reached up to the ceiling. A stick was hanging horizontally from ropes above the barrel. Tying a beeswax candle to one end and an apple on string to the other, Libby gave the stick a gentle push. She watched with satisfaction as it swung back and forth over the barrel of bobbing cider.

Returning to the ground, Libby checked the collection of silk ties next to the steps. Each one waited patiently to fasten hands behind their backs of potential bobbers; thus eliminating their temptation to cheat.

Libby experienced an unexpected flash of power as she heard Robert’s distinctive footsteps approaching. It was difficult not to grin too widely when she remembered how pleased he’d been when she’d suggested he had the honour of being the first to attempt the ancient apple catching ritual.

‘You wanted a traditional Pagan celebration boss, and this is it. There’s alcohol soaked bread to be offered to the trees in the orchard, cider ready to be poured onto the roots to toast the crops health, apple bobbing, and of course, the apple stick.’

Allowing Robert to slip his arms around her waist, Libby wasn’t surprised when he shuffled close enough for her to feel his crotch against her butt.  Rather than examine the beauty of the Celtic scene she’d created, Libby knew Robert would be checking to make sure no one else was in the barn.

He glided his hands from her waist to her tits. She let him. As the moment to execute her plan grew ever closer, Libby’s body had been on the cusp of an increasing impatient sexual high.

As Robert pushed her back against the barrel, he peered up at the hanging stick. ‘It looks impossible! And dangerous.’

Easing away from his grasp, Libby climbed the ladder and lit the end of the swinging candle. Her eyes flared with the fizz of the wick as it caught…