Opening Lines: The Corner Shop in Cockleberry Bay by Nicola May

It’s Thursday – which means it is ‘Opening Lines’ day.

Today I’m delighted to welcome Nicola May back to my site to share the first 500 words (exactly) of her brand new novel.

Over to you Nicola… 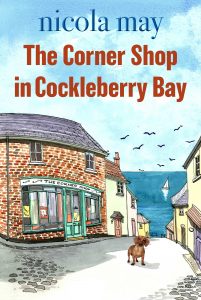 Rosa Larkin is down on her luck in London, so when she inherits a near-derelict corner shop in a quaint Devon village, her first thought is to sell it for cash and sort out her life. But nothing is straightforward about this legacy.  While the identity of her benefactor remains a mystery, the will states that the shop cannot be sold, only passed on to somebody who really deserves it.

Rosa decides to throw herself into getting the shop up and running again. But can she do it all on her own? And if not, who will help her succeed – and who among the small seaside community of Cockleberry Bay will work secretly to see her fail?

With surprising and heartfelt results, Rosa, accompanied at all times by her little sausage dog Hot, slowly unravels the shadowy secrets of the inheritance, and also brings her own, long-hidden heritage into the light.

The Corner Shop in Cockleberry Bay – The First 500 words

‘Are you sure you’ve got the right person?’

Rosa took off her bright blue woolly hat and scratched the back of her head, causing her dark brown curls to become even more unruly.

The tall, pinched-faced solicitor nodded. ‘Yes, of course we have. Evans, Donald and Simpson do not make mistakes. You, Miss Larkin, are now the official owner of the Corner Shop in Cockleberry Bay.’

He handed the bewildered twenty-five-year-old a battered leather briefcase and pointed to a small combination padlock on its brass clasp.

‘Here. The will stated that you – and only you – can open this, using your date of birth.’

‘This is all very strange,’ Rosa said.  ‘And where exactly is this Cockleberry Bay?’

‘Devon, dear, Devon.’  The solicitor looked under his rimless glasses. ‘I take it you know where that is?’

‘I may have a cockney accent, Mr Donald, but I’m not stupid.’

‘Well, open it then.’ The solicitor was shifting from foot to foot in anticipation. He confided, ‘We’ve been wanting to know what’s in there for days.’

Showing no emotion, Rosa gazed at him with her striking green eyes and asked coolly: ‘Is there anything else I need?’

‘I need to get to work.’ Rosa put her hat and scarf back on, zipped up her fur-lined bomber jacket and headed for the door. ‘Thank you so much for your help.’

And she was gone.

The solicitor peered crossly out of the window of the offices in Staple Inn and watched as the young woman, the briefcase in her arms, strode across the frosty cobbled courtyard and out into the bustle of London’s ancient legal quarter.

‘You’re late again, Rosa. This is a discount store, not a charity shop.’

But there wasn’t even a glint of the usual smile from her now reddening supervisor.

‘I’m going to have to let you go, Rosa. I need committed staff and to be honest, I don’t think you know what that word means. You’ve had all your warnings. I will speak to Head Office, and they will settle your final pay.’

Rosa sighed. ‘Really?’  When Mr Brown said nothing, she picked up the briefcase from the floor and added: ‘Whilst you’re at it, maybe you could tell them I’ve been wanting to stick this shitty, unfulfilling job right up their pound-coin-shaped backsides for weeks anyway.’

Rosa’s elderly neighbour was putting a holly wreath on her front door when she arrived at home, mid-morning.

Rosa murmured under her breath, ‘And Ethel Beanacre wins the award for the Nosiest Neighbour of the Year.’

‘Nothing, Ethel, just talking to myself.’

The sight of the worn briefcase secured further interest.

Rosa scrabbled for her key. ‘Don’t tell anyone, will…

Available from 9th April – you can pre-order your copy of The Cockleberry Bay here: https://www.amazon.co.uk/Corner-Shop-Cockleberry-Bay-ebook/dp/B07B8KML35/ref=tmm_kin_title_0?_encoding=UTF8&qid=&sr= 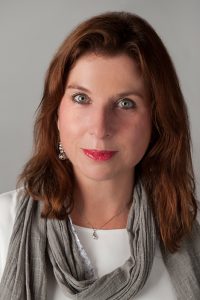 The Corner Shop in Cockleberry Bay is Nicola May’s ninth novel. In 2012 she won Best Author Read at the Festival of Romance for The School Gates and again in 2014 for Christmas Evie. Nicola likes to write about love, life and friendship in a realistic way, describing her novels as ‘chicklit with a kick’.

Nicola May lives near the famous Ascot racecourse with her black-and-white rescue cat, Stan.  Her hobbies include watching films that involve a lot of swooning, crabbing in South Devon, eating flapjacks – and, naturally, enjoying a flutter on the horses.

She also has her own Nicola May Author Page on Facebook

Find out more about her and all of her books at https://www.amazon.co.uk/Nicola-May/e/B004QUBKWW

Come back next week to read the first 500 words from one of Kate Thompson’s novels.

End of the Month: March Madness with Nell Peters