I’m in Penzance at the moment as part of the Literary Festival. I’ve been looked after so well, the events are amazing. I’m teaching a life writing class tomorrow, which is going to be great fun- but in the meantime…

I haven’t been to Cornwall since my Grandad died 15 yrs ago. I haven’t been to Penzance for 20 yrs, since my Grandad went to live with my Aunt in St.Austell. I have been amazed by how much being here has made me think- made me reflect on a time  hadn’t considered for two decades. Nor even writing Abi’s House and Abi’s Neighbour had prepared me for how it feels to be here.

I needed to write it out of my system – forgive the personal indulgence. (Anyone who says writing isn’t therapy needs therapy)

But that was then…

The toy shop where, at the age of five, I purchased a toy all on my own for the very first time- my parents smiling and encouraging, waiting for me at the front door- making me feel all grownup, is an EE mobile phone shop.

The fudge emporium where I’d spend hours choosing which flavour to savour- and then always go for rum and raison – is a pop-up charity shop.

The library has moved, but the place Google says it has moved to isn’t where it is, and I still can’t find it. I’d ask someone, but I’m invisible here. A reminiscing child in an adult’s body; wondering where The Rock Shop went.

I’m staying in a guesthouse. I deliberately went for somewhere small because I’m travelling alone, and because I had a feeling I’d be disconnected, and would need to hide from myself a while.  It was a mistake.

The man in charge is the right side of friendly, but is so clearly acting I feel sorry for him as he stands to attention in his white military style cooks coat, like a cross between Heston Blumenthal and a lab bound scientist. He talks a lot, but says nothing, and as he shows me round I stop listening.

To be fair, what he is saying could be interesting, but I’ve zoned out. I’ve travelled back in time. I’m not in my forties. I am eight years old and I’m in another guest house in another street a mile away.

It’s the same in side. Almost exactly. The neatly laid out china in the breakfast room is identical. (There must have been only one supplier. Or maybe a few guesthouse owners got together to purchase a job lot.)

The dark wood dresser with inbuilt mirror upon which the condiments that make up breakfast will be displayed in the morning, sits with imperial grandeur overlooking the room. The radio is playing BBC Radio Cornwall just loud enough for visitors to be aware that it is on, but not loud enough to actually hear it. A volume which will ensure maximum discomfort for the morning’s breakfasters as they all sit in silence, each wondering if they should be the one to end the hush that is enhanced rather than lessened by the scrape and clatter of cutlery on toast covered china plates.

The internal doors, six in all, each have a small number screwed onto them. The sort you’d normally fix onto an outdoor gate. The doors are painted in a sensible wipe down magnolia gloss.

Any minute now my Nan will walk through one of them. A cigarette clamped in her pursed lips, a blue housecoat buttoned up at the front, her hair freshly out of curlers, she will tell me I want a cup of tea. I don’t. I never did.

She will make it and I will gag it down. I love her. I don’t want to disappoint her by wasting the tea. Wastefulness is not allowed.

She and my Grandad ran a guesthouse like this. The only difference between their house and this one is that it’s half a mile further from St Michael’s Mount, and that modern day requirements insist on the addition of an ensuite rather than just a wash basin.

My room (number 6) has a shower cubicle at the end of the bed. You can’t turn around in it. You can’t shut the door unless you want to wash your hair. I’ve washed my hair twice since yesterday. 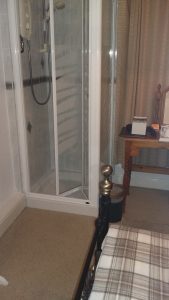 When my brother and I were small we’d sleep in the attic room of the guesthouse that lived on Alma Place. We’d watch St Michael’s Mount appear out of the fog on muzzy days, and marvel at how it remains hidden when it rains. We’d borrow binoculars so we could spy into the windows of the castle, and wait to see the ferry head out, and then come back from the Isles of Scilly.

I sat and watched the night arrive over St Michael’s Mount last night. Funny how nature can fill you with the same sense of wonder as childhood can with something as everyday as dusk. 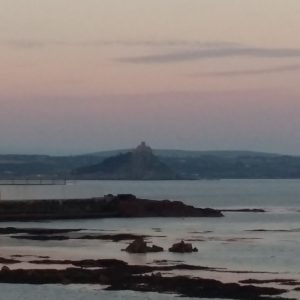 The guesthouse requires you to be out of your room from nine until twelve (after a knife and fork scraping silent breakfast at 8am prompt- latecomers not admitted). So at five to nine I took to the streets in search of a place to write.

The town does not open until 10am. It is very hot and all the places I think I will find shade don’t seem to want me to stay. My feet are compelled to keep walking. It’s as if they are looking for something, but they don’t know what. 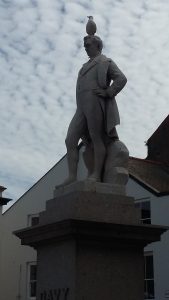 After an hour of walking in the hot humidity I finally find an open café with a blissfully cool basement. I’m in there now. Writing this.

It has just occurred to me as I sip a fashionably over-strong coffee, that the sea and its accompanying grey pebbled beach is only a few hundred metres away. It didn’t even cross my mind to walk towards it. I wonder why? I’m in Cornwall, surely I should head to the sea and not inland…

The café I’ve found myself in is opposite the EE shop.

The EE shop used to be a toy shop. I bought my first toy with my own pocket money in there when I was five years old. It was a Sindy doll wearing horse riding gear.

It was a happy shop rammed from floor to ceiling with Action Men and Dolls and Lego. There were buckets and spades and fishing nets in big barrels on the pavement outside. There are cross people with poor Wi-Fi standing where those barrels used to be.

The EE shop is at the foot of a series of steps that lead up to Bread Street, that leads to the back of Alma Place.

Once my grandparents would have been up there.

I’m not going to walk up those steps.

Because that was then.

PPS. After I wrote the above, I found the library, where I was treated like royalty, and was given an incredible room to work in.