It’s good to be back where I belong; tucked away with a huge black Americano, toast and marmalade, after three days away as a contributor to the Penzance Literary Festival.

My adventure began last Thursday when I left Tiverton Parkway (only slightly delayed), and travelled the rail line to Cornwall. The scenery between Devon and Cornwall is stunning, and my plans to work as I went along were quickly scuppered in the face of the beauty of South West England. 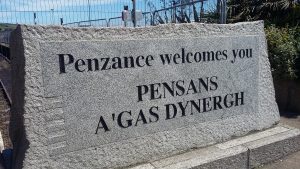 As you’ll know if you read my previous blog, that coming down to Penzance was a big deal for me.  I hadn’t been there for 20 years, and I was unprepared for how emotional my arrival there would make me feel. More details about that here – http://wp.me/p75ZD9-WA 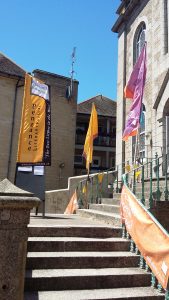 Having found my guesthouse and left my luggage in the owner’s reliable hands, I took the advice of one of the literary festivals organisers, the lovely Teresa Benison, and headed to the Honey Pot Cafe. This was conveniently placed directly opposite the Acorn theatre – location of the panel I was due to appear on at three that afternoon.

I can’t recommend the Honey Pot Cafe enough- if you happen to be in Penzance at any time, make sure you pop in. 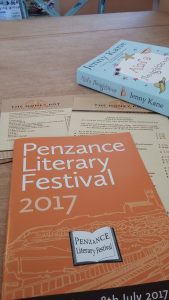 Anyway – the panel I sat on, with the illustrious novelist Liz Fenwick and YA novelist Christopher Vick, was enormous fun. Teresa hosted the panel, which was based on the theme of authors setting their books in Cornwall. I happily chatted about Abi’s House and Abi’s Neighbour, while Liz shared the background to her new novel, The Returning Tide (incredible story) and Chris talked about Storms, his new YA novel (a must read). 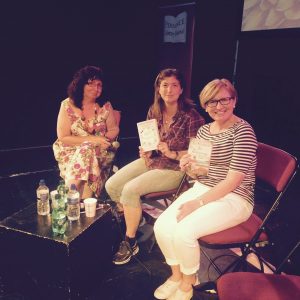 On the Friday I had no festival responsibilities. Instead I had my coffee shop blogger hat on. Travelling through the sheering heat (we were blessed with incredible weather) I moved around Penzance, sampling coffee and nibbling cake. I rather love my job sometimes! All the resulting blogs will appear on my Have Americano and Pen…Will Travel blog over the next few weeks. Check out the first one here. 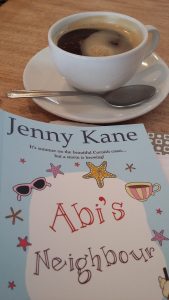 As much as I enjoyed the panel I took part in, not to mention listening to the other visiting authors and poets (the poetry event on the Thursday night was amazing- and diverse! I’ve never heard poems about dissecting David Bowie before- unusual….), the highlight for me was the life writing class I taught on Saturday morning.

Based in the fascinating Morrab Library, within the Morrab Sub-Tropical Gardens, I was in my element. Surrounded by works of nonfiction that went back decades, 15 intrepid creative writing workshoppers came in. All smiling- some clearly nervous and wondering what on earth they’d let themselves in for- others clearly confident; every chair filled, and we were soon ready to launch into the world of fictionalising our lives and personal experiences. 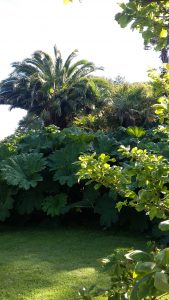 I’m not sure which memory from that class will stay with me the longest.

The wonderful lady whose imagination decided that her ice cream didn’t want to be an ice cream, but wanted to be fruit pieces instead.

The terror so perfectly described by the gentleman whose memory of his first day at school involved lining up outside his classroom while his teacher flipped his cap off with a cane because it wasn’t quite straight.

The two friends who came in giggling, laughed all the way through the class, and left with even wider smiles- having produced some incredible writing along the way.

They were a dream class to teach. So much talent- so much potential. I look forward to seeing some future short story competition winners and novelists amongst them. 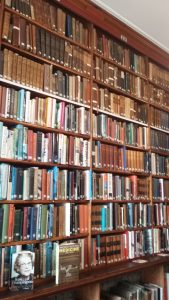 My time in Penzance was over all too quickly. I would like to thanks Teresa, Linda, Barbara, and all the organisers and stewards who made my visit so much fun. Special thanks must go to the lovely chap who wrestled with the projector and its screen for me at Morrab Library – and to the kind library staff for providing tea, coffee and cake for my workshoppers.

Thanks must also go to the Edge of the World Bookshop on Market Jew Street, Penzance. The friendly and wonderful folk who work there not only managed to order loads of my books, but kindly displayed them at both my events as well as displaying lots of them in their bookshop. There is a never ending thrill in knowing my books sit on bookshop shelves. 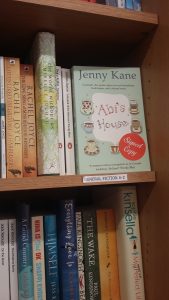 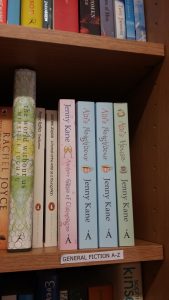 Penzance Literary Festival is styled as the country’s most friendly literary festival with good reason.

Roll on next year’s event.