If it hadn’t been for Geoffrey Chaucer, then it is unlikely that we would connect the celebration of St Valentines Day with romance and love. 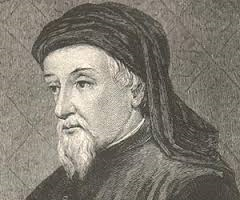 In 1382 Chaucer wrote the Parlement of Foules to honour the first anniversary of the engagement of King Richard II to Anne of Bohemia, when they were both only 15 years old. The poem contained the lines…

For this was on seynt Volantynys day, Whan euery bryd comyth there to chese his make.

[“For this was on St. Valentine’s Day, when every bird cometh there to choose his mate.”]

Prior to the publication  of Chaucer’s poem, Saint Valentine’s Day had been a religious celebration of a martyr (either Valentine of Rome or Valentine of Terni), and held no romantic links at all. However, writing at a time when romance and courtly love was at its most fashionable, Chaucer’s work quickly caught the public imagination.

Despite February being an unusual month for Chaucer to have written about birds mating, he wasn’t the only medieval author to have positioned such Spring-like antics so early in the year. Three other medieval authors centered their love poems on the allegory of birds mating in connection with St. Valentine’s Day around the same time; Otton de Grandson from Savoy, a knight called Pardo from Valencia, and the English poet John Gower.

Although it is unclear which of these other early Valentine poems came first, they were all widely read, and the connection between St Valentine’s Day on 14th February, and the joys of chivalrous romance strengthened and grew so much, that soon, the martyred saint himself was all but forgotten. 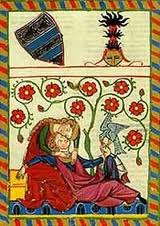 By the Eighteen century in England, the 14th February had firmly evolved into an occasion when partners express their love for each other by presenting flowers, chocolates, and other gifts.

In the Nineteenth century, the sending of Valentines cards was so popular that they were becoming a mass produced item; especially in America and Europe, where the tradition continues to expand to this day.