The above may take you back a bit. To the 1990s, to be exact, when Paul Whitehouse and Harry Enfield dominated the airwaves with their comedy sketch shows featuring dinosaur-tastic DJs Smashie and Nicey, a couple of characters inspired by several BBC DJs of that time who had been spinning disks, and the same tired old patter, since the year dot.

Nostalgia is, of course, big business. There has always been a yearning for the past, which is regularly seen as a better, simpler time. Quite often, in my view, this is absolute hogwash, as many view the openly racist, sexist, homophobic, disease-dominated, comfort-lite times through rose-tinted glasses. Or, in many cases, through goggles which have been painted completely red.

Not all nostalgia is bad, however, as long as you try and keep an open mind about the era you’re reminiscing over. And nostalgia can indeed be a positive thing, on occasion, as this blog will hopefully show as I finally get to the point and talk about the television of yesteryear.

TV has long been an area of warmth, comfort, and fun for hordes of fans who fondly remember a childhood spent watching such shows as Doctor Who, The Prisoner, The Avengers and so on. Indeed, our own Jenny Kane has a side-line going in producing stories within the framework of the beloved 1980s telefantasy Robin of Sherwood.

These old shows still hold a substantial fanbase of original and new viewers, with those who watched as kids often sharing their fan passions with their own children, meaning that TV is now something straddling, and joining together, the generations.

Of course, on the downside, the toxicity of some fans is truly horrendous, with gatekeeping being a common issue across many fandoms. See the rampant misogyny over the casting of Jodie Whittaker in Doctor Who as one prime example.

But at its best, you can find the fans combining to create new content, be it books, audio dramas, documentaries, and even new filmed episodes, all inspired by their beloved shows. And as they can’t (usually) do any of this for profit as they don’t hold the required licenses, they instead often do it to raise money for charity. (Thus finally tying in with the title of this blog. Bet you thought I’d forgotten that, didn’t you?)

One recent example I was lucky enough to be involved in was a new collection of fan-created content set around the final series of Blake’s 7. For those who don’t know, Blakes 7 (minus the apostrophe) was a low-budget BBC science fiction show that ran for four seasons from 1977-1981, and followed a small band of freedom fighters in their battle against the evil Federation.

The budget for this epic space opera was non-existent. Sets wobbled, spaceships flipped between models and cardboard cut-outs, robots were extras sprayed silver, and aliens were… what you’d expect on a 1970s BBC budget. Only slightly worse.

What saved the show was a dedicated cast and crew overcoming the budgetary issues to take on a heady brew of great concepts, great characters, and (occasional) great writing. The freedom fighters, for example, weren’t the young innocent heroes of typical pop culture fare, but were instead a mixed bag of idealists, criminals, and extremists – some of whom didn’t even want to be in the revolution. The totalitarian Federation, meanwhile, was headed up by the glam diva, Servalan, who wore long frocks and high heels no matter what the situation or environment, and who quite often ended the episode by killing her underlings. And the final episode still stands, for me, as one of the best of any TV show, regardless of genre.

Merchandise was a given, including toys, jigsaws, novel tie-ins, and – crucially – annuals. Three of these were produced, as a tie-in with seasons 1-3, while a fourth was planned but for some reason never saw the light of the day. And this is where modern-day fandom comes in.

Fast forward to now(ish) and dedicated fan Grahame Robertson decided to create an annual for the final season of Blakes 7, a substitute for the official book that never appeared. To do that he needed stories, artwork, and articles. He put a call out on social media and had an immediate, positive response. Indeed, the response was so positive, he had too many stories for the project, despite expanding it exponentially until it resembled something not unlike an encyclopedia in terms of girth. 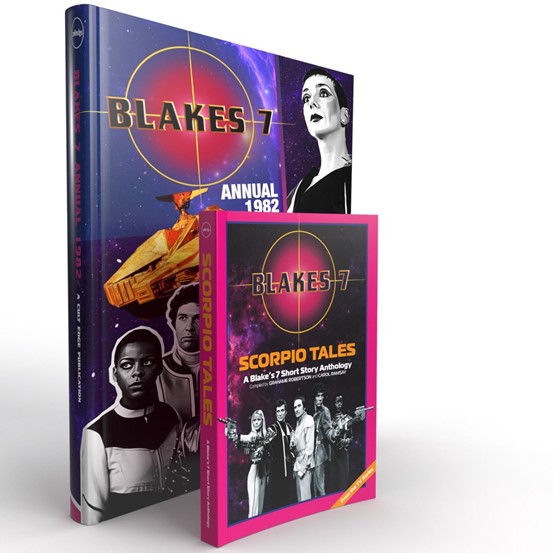 Grahame’s response to this was very sensible. He decided to do an extra anthology for all the stories that wouldn’t fit into the annual. The result? The Blakes 7 Annual 1982, and the Scorpio Tales anthology. Two beautiful books stuffed full of fan enthusiasm, skill, and dedication. And this also means twice the money for charity; at the time of writing, the annual alone has raised over £2000 for both Axminster and Lyme Cancer Support, and Save the Children UK.

Unfortunately, not every fan project moves forward. I also contributed to a non-profit Doctor Who anthology entitled We Are The Master, but the editor seems to have run foul of BBC lawyers, (despite all funds raised going to mental health charities), and hence the whole project has been derailed. I hope this is only a temporary setback, but there seems to be no trace of it anywhere online, so this may, alas, be permanent.

But at least we have something out there made by a few of the fans, for the enjoyment of everyone, and the benefit of those who need it. Which is a nice way to go into 2022.

The Blakes 7 annual can be found at: https://www.lulu.com/en/gb/shop/carol-ramsay-and-grahame-robertson/b7-annual-1982/hardcover/product-4e6jrz.html?page=1&pageSize=4

The Blakes 7 anthology, Scorpio Tales, can be found at: https://www.lulu.com/en/gb/shop/carol-ramsay-and-grahame-robertson/scorpio-tales/paperback/product-5nqm7r.html?page=1&pageSize=4 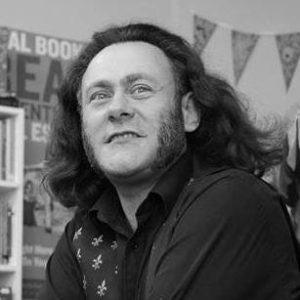 Jon Hartless was born back in the 1970s, and feels very old. He contributed the short story “Space Rats in the Maze” to the Scorpio Tales anthology. He is also the author of the Poppy Orpington Chronicles, a Steampunk motor racing series which can be found at: https://www.amazon.co.uk/gp/product/B08MV8KMYN?ref_=dbs_p_pwh_rwt_anx_a_lnk&storeType=ebooks

Many thanks Jon. Got to love Blakes 7!