Doing a local craft fair was a spur of the moment idea . One that I have to confess I had an uneasy feeling about.

Selling my wares in the anonymousness of London is one thing- but putting a face to my pen name locally was something I was nervous about.
However, with my brilliant artistic friend, Mayo, in tow, I thought “what the hell”, stocked up on a batch of Another Cup of Coffee, and dived in. 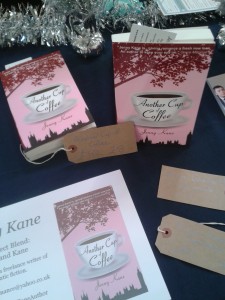 Based in my local town hall, I think it would be fair to say trade was very quiet, as we were up against 3 other local fair’s, and the huge Christmas Market in the nearest city. However,  I had set my sights on simply enjoying myself – and only selling books if I was lucky- and so I felt thrilled when I’d sold half my stock, and Mayo had sold a painting, by half past one.

The most rewarding thing about going along to the event was meeting such amazing people. Our fellow stall holders were so kind, and each had a fascinating story to tell. Our customers were friendly and full of Christmas spirit. It was wonderful to meet so many new people in the neighbourhood. 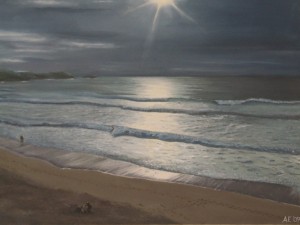 So next time I do an event like this, perhaps I won’t feel so nervous about being seen to be Jenny (or Kay- I sold a few of her books as well!)- which is just as well, as I’ve been invited to do another book sale on Tuesday!!

Nice and Naughty or Naughty and Nice…