Today I’m delighted to welcome the rather brilliant Dr Ashley Lister to my place. as part of his Blackstone Towers #blogtour.

First, I’d like to thank @JennyKaneAuthor for allowing me to bring my blog tour here today. This is day five of the blog tour and I’m very excited because I’ve written a really fun horror novel and I want to tell you all about it.

By way of introduction, I should begin by saying my name is Ashley Lister; I write horror fiction and some of the crudest poetry known to mankind; and I’m here talking about a horror novel I’ve written which will be published on August 22nd. It’s called Blackstone Towers and this is what the story is about:

The talismans of the magi control seven realms of the mortal world. One can grant the bearer immortality; another gives its owner unfathomable wealth; a third gives the holder unerring foresight. There is a talisman to control reality, success, the deliberate and the accidental, and a talisman that governs the balance between love and hate.

The planets are now aligning, and one worldly resident of Blackstone Towers knows the talismans urgently need collecting and destroying before they fall into the wrong hands.

The only problem is establishing whose hands are the wrong ones. 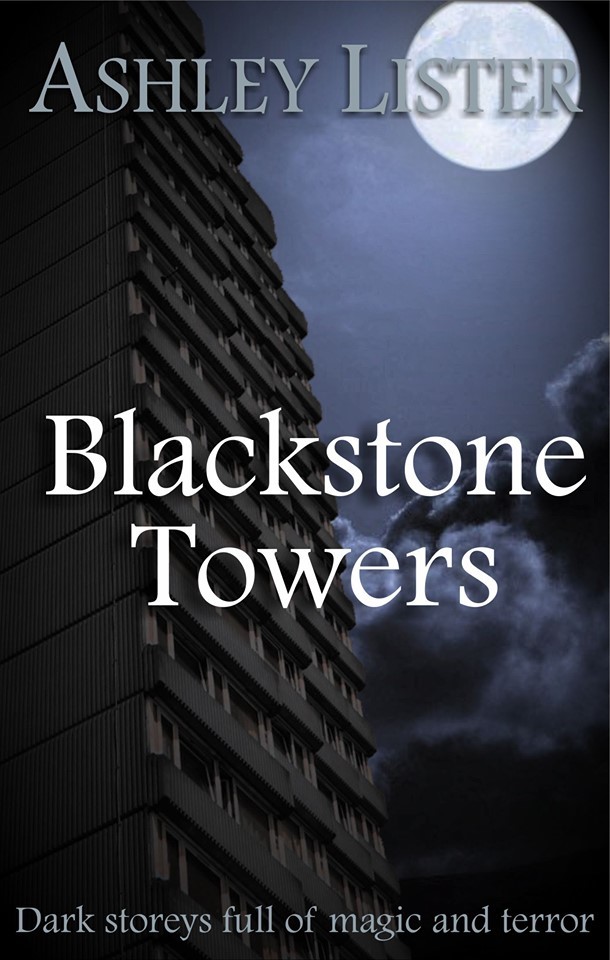 One of the commonest questions writers get asked is, “Where do you get your ideas from?” I know we all have different ways of responding to this question but, for some bizarre reason, I seem able to remember where inspiration for my horror stories comes from.

I never had such thoughts about my previous genre fiction but, if you were to ask me where I got the idea for Raven and Skull, my horror novel set in a hellish office, I’d tell you it happened one night when I was giving my mother a lift home. She told me she was worried about something. I asked her what was the matter, and she explained that she’d been doing some knitting and was worried it was causing deaths.

I must admit, my first thought was that she needed stronger meds. I asked her to explain the relationship between her knitting and all the deaths, and she said she’d made hats and scarves for a couple of people and they were now no longer with us.

Now, whilst it was sad to think she was displaying symptoms of a mental decline, I was excited because she’d given me a great idea for a story. It was filed in my head under the working title ‘the knitting needles of death’ and it went on to become Raven and Skull.

It’s the same with Blackstone Towers. I remember exactly where I was when the idea came to me. I had been visiting London. We were staying in a lovely hotel near the tower bridge. And we’d got into the lift to go from our room to see a show (I can’t remember if it was Wicked or The Book of Mormon, but I do know we had a great time).

In the elevator there was an old woman. She stared at me for our entire descent to the lobby. She had ghost-white hair, she was dressed in remarkably old-fashioned clothes and, because I was a little unsettled by the intensity of her stare, I wondered if she might be a ghost.

Elevator etiquette is a peculiar thing. We travel shoulder to shoulder with strangers. Eye contact is usually forbidden. Talking is kept to the bare minimum. As I brooded on these ideas, I realised that I could have travelled alongside thousands of ghosts in the many elevator journeys I’ve taken during my life, and I had simply ignored those ghosts because this is how we’re expected to treat people in elevators. The idea was disconcerting and I realised I needed to find a hook for the rest of the story so that my elevator ghost could be seen as truly terrifying.

Blackstone Towers is the result.

This YouTube clip of a wickedly inventive elevator prank (https://www.youtube.com/watch?v=bE_HMqzm9Ws) also helped me to organise my thoughts. The results of what I think happens when you meet a ghost in a lift can be seen in the opening chapter of Blackstone Towers.

All of which leads me to the question: if you were a ghost, where would you want to haunt? Haunting an elevator struck me as a fun idea because there would be a relatively captive audience. Haunting a castle would seem classy. Haunting a library would give me all the time I needed to hang around with books. There must be hundreds of inventive places to haunt and I’d love to hear your thoughts on this.

Answer below, if that’s easiest for you.  I’ll be checking back throughout the day.  Answer on Twitter if you prefer, using the hashtag #BlackstoneTowers. If you don’t use Twitter, and don’t like the comments box, please feel free to email me at me@ashleylister.co.uk. I’ll be collecting all the answers and, on the day of publication, I’ll chose my favourite response and send one lucky winner a free copy of one of my novels.

This is day 5 of a 9 day blog tour and, each day up to the launch, I’ll be on a different blog, as detailed below. Each day I’ll be asking a different question. Please feel free to follow me, answer as many questions as you like, and if you’ve got any questions about the book or anything else, I’ll be happy to answer.

Also, if you fancy coming to the online launch, where I’ll be reading from Blackstone Towers and sharing some of my ribald poetry, drop me an email and I’ll send you an invite.

Thank you again to @JennyKaneAuthor and, to all you readers, I look forward to seeing where you would haunt if you were a ghost.

If you want to pre-order a copy of Blackstone Towers, this link should take you through to the Amazon page: https://www.amazon.co.uk/dp/B08F2T2K5M/ref=sr_1_1?dchild=1&qid=1596278235&refinements=p_27%3AAshley+Lister&s=digital-text&sr=1-1&text=Ashley+Lister

Many thanks for popping by today Ashley.

Happy reading everyone – and don’t forget to let Ashley know your haunting thoughts!