End of the Month: Spooky October

It’s that time again! Yes- really- it is the end of the month again!

So, let’s hand over to Nell Peters to see what she’s uncovered for us this month.

To paraphrase the late David Frost; hello, good morning/afternoon/evening, and welcome y’all. In case you hadn’t noticed, this is the last day of October, aka the day we glance in the mirror and girly-squeal at the scary Halloween mask reflected, only to realise it’s not a mask after all.

There is a film called 31st October – an Indian Hindi historical action drama, written and produced by Harry Sachdeva and directed by Shivaji Lotan Patil. 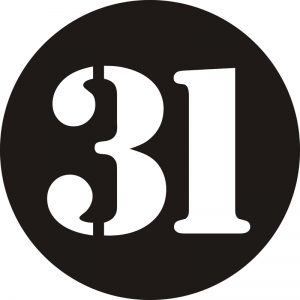 Based on fact, it focuses on the aftermath of Indira Gandhi’s assassination on 31st October 1984 and stars Vir Das, Bollywood actor and comedian (although the funnies might have been in short supply in this script) and Soha Ali Khan, actress. The film had its official screening at the London Indian Film festival 18-20 July 2015, before going on general release fifteen months later.

Reaching the tender age of eighteen today is Willow Camille Reign Smith, who is professionally known as Willow, an American singer, actress and dancer and the daughter of Willard Carroll Smith Jnr and Jada Pinkett Smith. Her dad is of course better known as Will Smith, star of the TV series, The Fresh Prince of Bel-Air and numerous award-winning films. In my end-of-September blog for Jenny, I mentioned Hungarian author, Frigyes Karinthy’s 1929 hypothesis that all living things and objects are just six degrees of separation away, so that a ‘friend of a friend’ chain can be made to connect any two in a maximum of six steps. Want to take a wild guess at the title of the film in which Smith played his first major dramatic role? A shiny new goldfish (bring your own bowl) for those who guessed it was Six Degrees of Separation (1993). 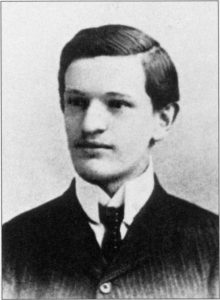 On the very day that Willow was born, Kazuki Watanabe, Japanese musician, guitarist and lead songwriter of the visual kei rock band, Raphael, died aged just nineteen, from an overdose of sedatives. In case you were wondering (as was I) visual kei is a movement among Japanese musicians, characterised by varying amounts of make-up, elaborate hair styles and flamboyant costumes, similar to glam rock. The group were popular, with all their releases entering the top 40 of the Oricon (holding company of a corporate group that supplies statistics and information on music and the music industry in Japan) charts, but disbanded after Kazuki died.

Also breathing their last – though aged a slightly more reasonable eighty-five years – on this day in 2000, was American journalist and screenwriter, Ring Lardner Jnr (born Ringgold Wilmer Lardner), who was blacklisted by film studios during the Red Scare of the late 1940s and 1950s. A member of the US communist party since 1937, he moved to Hollywood to be a publicist and script doctor before writing his own material. In 1947 he became one of the highest paid scriptwriters in Hollywood when he signed a contract with 20th Century Fox for $2,000 a week (equivalent to approx $22,000 a week today). A short-lived claim to fame, however, as later that year he was called before the House Un-American Activities Committee (HUAC) to account for his left-wing views, two days after he was sacked by Fox. Along with nine others, collectively known as the Hollywood Ten, he cited the First Amendment and refused to answer their questions, but the HUAC and appeal court were having none of it; Lardner was sentenced to twelve months in prison and fined $1,000 for contempt. 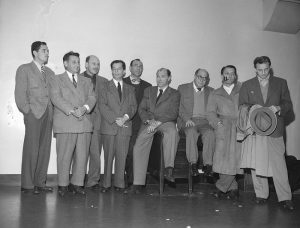 Nine of the Hollywood Ten

Blacklisted in Hollywood, he moved to England for a time where he wrote under several pseudonyms for TV series, including (and this will interest Jenny, aficionado of all things Lincoln green) The Adventures of Robin Hood. After the blacklist was lifted in 1965, Lardner worked on scripts for some high profile films, including M*A*S*H (1970), which earned him an Academy Award (his second) for Best Adapted Screenplay. Perhaps as some sort of posthumous tribute, an episode of Robin Hood first broadcast by the Beeb in December 2007, was entitled Lardner’s Ring. 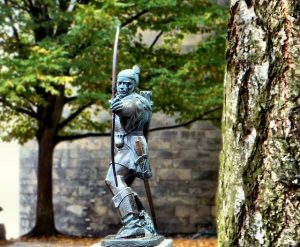 Sticking with 31/10/2000; that was the day Soyuz TM-31 became the first Soyuz spacecraft to dock with the International Space Station (ISS). Launched from Russia, it carried the three members of Expedition 1 – Russian cosmonauts Yuri Gidzenko and Sergei Krikalev, with American William Shepherd – who collectively formed the first long-term ISS crew. 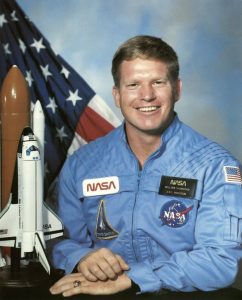 Lowering the tone as usual, I thought you might like to know there are two toilets aboard the ISS, both of Russian design, which have waste and hygiene compartments using fan-driven suction systems. Astronauts first fasten themselves to the toilet seat, which is equipped with spring-loaded restraining bars to ensure a good seal. A lever operates a powerful fan and a suction hole opens to allow the air stream to carry waste away. Solid matter is collected in individual bags, which are deposited in an aluminium container, and stored for disposal when full. Liquid waste is evacuated via a hose connected to the front of the toilet, with anatomically-correct urine funnel adapters attached to the tube, so that men and women can use the same toilet. Urine is collected and channelled to the Water Recovery System, where it is recycled into drinking water. Fancy that. Actually, I’m not sure I do … 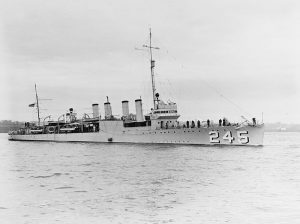 On the last day of October 1941, the destroyer USS Reuben James (named after a boatswain’s mate famous for his heroism in the First Barbary War) was torpedoed by a German U-boat off Iceland, killing more than one hundred sailors – the first US Navy vessel sunk by enemy action in WWII. This was on the same day that, after fourteen years of chipping away, Mount Rushmore was completed.

It was historian Doane Robinson who came up with the idea of carving the likenesses of famous people into the hills to promote tourism. His initial plan was to feature American West heroes like Lewis and Clark (led the first expedition across the western terrain of the US), Red Cloud (one of the most important leaders of Oglala Lakota, part of the Great Sioux Nation), and William Frederick – Buffalo Bill – Cody (scout, bison hunter, and showman), but Borglum decided the sculpture should have a broader appeal and chose the four presidents. 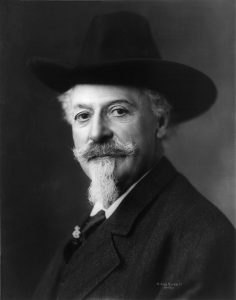 Another mount; the Mountjoy Prison helicopter escape happened forty-five years ago today, when three IRA volunteers flew out of the Dublin jail, aboard a hijacked Alouette II helicopter, which landed in the exercise yard. With IRA Chief of Staff, Seamus Twomey doing a five-stretch and senior republicans, J. B. O’Hagan and Kevin Mallon also being incarcerated in Mountjoy, the command structure was seriously depleted. So, a plan involving explosives that had already been smuggled into the prison (how?!) was hatched; a hole would be blown in a door (anyone else’s thoughts drifting to Michael Caine/The Italian Job? Just me, then) which would give the prisoners access to the exercise yard. From there, they would scale a rope ladder thrown over the exterior wall and bundle into a getaway car, driven by members of the IRA’s Dublin Brigade. Alas (or not!), the plan failed when the prisoners couldn’t gain access to the yard and the rope ladder was spotted.

Back to the drawing board, Plan B involved the helicopter, with pilot Captain Thompson Boyes flying under threat of having his head blown off by the firearms trained upon him. In the exercise yard prisoners were watching a football match, when shortly after 3:35 pm the helicopter swung in to land, with Kevin Mallon directing the pilot using semaphore. (Seriously? If I wrote that in a book, my editor would throw it out as way too far-fetched!) Prison officers on duty initially took no action because they believed the helicopter carried the Minister for Defence, Paddy Donegan, who presumably was in the habit of dropping in for tea. It was only when prisoners surrounded the eight guards present and fights broke out, that the officers realised an escape was in progress. Twomey, Mallon and O’Hagan boarded the helicopter and it took off – apparently in the confusion one officer shouted ‘Close the gates, close the f***ing gates!’ Doh! The escapees landed at a disused racecourse in Baldoyle, where they transferred to a hijacked taxi and were whisked away to safe houses. 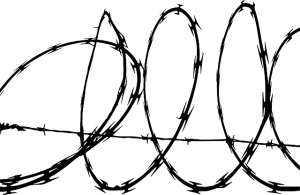 Mallon enjoyed his freedom for the shortest time, as he was recaptured in December 1973, O’Hagan early in 1975 and Twomey in December 1977. In the aftermath, all IRA prisoners were transferred to maximum security Portlaoise Prison, and to discourage any further getaway attempts the perimeter was guarded by troops from the Irish Army. And shutting the stable door etc, wires were erected over the prison yard to prevent helicopters landing in future – so presumably poor Paddy Donegan had to get the bus with the rest of the hoi polloi.

On the home front, the OH and #3 son returned safe and sound from their jolly in South Africa, vowing to go back next year and take #4 with them. Fine by me, as I really enjoyed the peace! On their penultimate night they’d booked an hotel near Cape Town on line and had a long drive through filthy weather/bad visibility/electric storms to get there, relying heavily on sat nav. Arriving very late, son gave his name – Piers – at reception and was told they were expected. Shown to a sumptuous twin, with patio doors opening onto a veranda and the beach, they were much impressed by the value they were getting for their money – until they went to pay the bill next morning and were charged considerably more than they had been quoted. They were in the wrong place and the booking had in fact been made by someone called Pierre who didn’t turn up, his travels presumably thwarted by the weather conditions. What are the chances? I gather OH and #3 weren’t overly worried, as it was such a great room.

#3 has since done a lot of to-ing and fro-ing UK/India/Thailand and it’s even more difficult than normal to keep up with where he’s currently hanging his hat. He has some more leave due early in November and will hopefully be around for our annual combined Halloween/Bonfire Night party, delayed for his attendance in his guise as everyone’s favourite uncle. 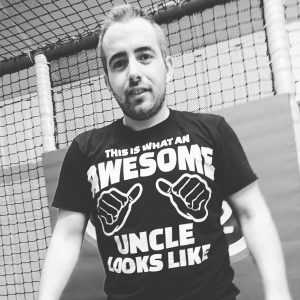 I have sold the family home in Twickenham to my parents’ neighbour, who offered my dad an obscene amount of money many years ago and when refused, bought the house next door. It’s strange to think that it will no longer be ‘our’ house after so long, but now that my mother is in residential care (she’s not been thrown out yet!), it’s impossible to justify paying those whopper fees, plus meet the expenses entailed in keeping a large, empty house going. 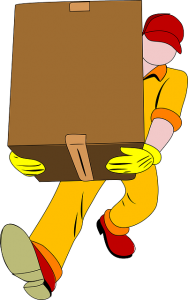 I say empty, but of course the place is filled with possessions accrued during sixty-odd years of marriage – including a zillion dust-collecting figurines of varying value, so beloved by my mother. We have taken a few favourite pieces to decorate her room in the home, along with family photographs etc, but that has hardly made a dent. What does one do with so many complete dinner services, tea sets and ornate crystal glasses for any drink you care to name? Some of the furniture will be sold, some given away – it may take a while to clear the place! Then there’s the garages and outbuildings, the garden …

Thanks, Jen and toodles everyone! NP

Good luck with all that sorting and moving hun!

Thanks again for a fabulous blog.