One of the most wonderful things about my job as a writer is that I get to meet a huge variety of amazing people. A few weeks ago I was at a book and art sale in Taunton, when I me an artist who concentrates on the painting of cows- yes, cows! We got chatting, and during the course of our conversation I discovered that her mum had started to write. So, please let me introduce you to the talented Kathryn Joyce…

Thank you very much, Jenny, for inviting me to be a guest on your blog and talk about my writing journey.

The novel started in earnest about seven years ago when I was having coffee with a friend. I was, frankly, in a bit of a rut. We (my husband, David, and I) had just returned from a year long placement doing voluntary work in Pakistan (with VSO, [Voluntary Service Overseas]) and wondering if another placement was to be on the cards.

The coffee friend is a natural problem solver; she can’t resist solutions. ‘Get a job,’ she suggested then changed tack as she saw my look of incredulity. ‘I know what you should do’, she said, ‘Write a book – you’d be good at that’ (note, challenge number one).

Her idea that I ‘might be good at that’ came from pre-blog newsletters that David and I had been writing about our time in Pakistan and during a previous placements in West Africa. I’d loved writing them and I suddenly realised they were great sources for a book. The first question (of many, I was to find out) was what would I write about? Well, it wouldn’t be about me, that was for sure. I’d heard many people say they’d write a book one day – the first word, it seemed, would be ‘I’ and the last, ‘me’! If I was going to write a book, I decided, it would have to be one I would want to read, which meant realistic fiction written in good, poetic prose (challenge number two), and it would have to explore real issues, genuine dilemmas and unexpected solutions.

Seven years later the book has evolved. Set partly in England and partly in Pakistan it tells the story of a young couple, a catastrophic mistake and a disastrous misunderstanding. And, I’ve been told, there are some memorable lines. The fact that it’s a now real book – as opposed to a manuscript – continues to be a great surprise to me. As is the discovery that people appear to like it. Wow!

Now I’ve got the writing bug a second novel is in the air (challenge number three), and in the meantime, I’m writing short stories. Whilst the sun shines (metaphorically if not actually) I’m a star! Well, a very minor one. I’ve a story shortlisted in The Eyelands International competition that is to be published in an anthology in January, and I’ve ‘appeared’ on radio, in newspapers, in blog interviews, at book groups, community groups, and book-signing engagements (note challenges four to nine). I wonder how many authors have done a book signing at Waitrose. It surprised me how many people wanted to treat themselves to an author signed book to cheer a chilly Saturday morning. How did I get to do a book-signing at Waitrose (challenge number ten)? I asked them! 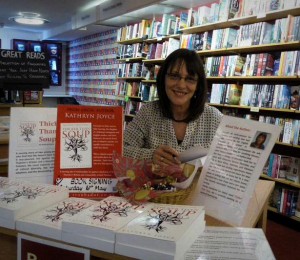 If short stories are your thing, there’s a taster on my blog: http://www.kathrynjoyceauthor.co.uk/#!follow-the-author/c112v 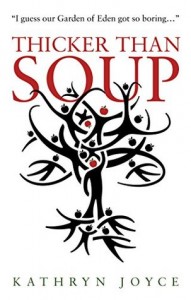 And if novels are more you, here’s the back-cover blurb for Thicker Than Soup:

Focussed on their careers, Sally Lancing, the daughter of a Pakistani immigrant and English mother, and her partner John Sommers, the much-loved son of adoptive parents, are equally committed to a child- free future.

Then a surprise pregnancy – and doubts about the paternity – hurls them both into new, but separate, lives. Left devastated by the loss of her job, her partner, and her home, Sally and her baby son embark on a journey to Pakistan to meet her father’s distant family. Once there, Sally’s’ eyes are opened to a world that challenges her deepest beliefs.

Meanwhile, John hides his vulnerability behind his increasing success as a restaurateur. But the baby has rattled skeletons, and unable to avoid his past, he too embarks on a journey – to find his birth parents.

As their horizons broaden and their views are challenged, the child, Sammy, is an innocent but enduring link. This story of love, loss and discovery explores the concepts of morality and independence as Sally and John attempt to build separate futures. Until, that is, providence stirs life’s mixing bowl once more, and Sammy is again the crucial ingredient.

A moving tale of relationships, set against a backdrop of both Thatcher’s Britain and a beautifully evoked Pakistan, the novel explores the serious issues of cultural integration and diversity as well as the ‘who am I’ of adoption and the devastating shock of HIV.

Thicker Than Soup is available direct from the publisher, or by following the links to your favourite retailer:

You can find me at:

Author Bio: It’s been a few years since I left Hull as a teenager, but it was in this city of my birth and education that an English teacher at Wolfreton Comprehensive School, Miss Wilson, cultivated my childhood love of reading and writing.  I wonder if she’s still around! For her, I wrote essays with verve!

But, a few years passed after school and life got seriously grown-up. As a mum with a full time career there was little time for literature other than reading a chapter or two before sleep took over.

Then came a change of direction. My children went off to university – and so did I. After three years of reading psychology at Leicester I had new choices and inspired by a daughter who had worked in Vietnam, my husband and joined VSO. Firstly we worked in West Africa, then Pakistan, and later, Viet Nam too. VSO had an advertising slogan around that time which said ‘What did you do last year, and will you remember it for the rest of your life?’ For us, immersion in these cultures brought exciting new experiences almost every day and the urge to record and share them with loved ones led to a new phase of writing that has continued beyond expectations. And the newsletters are still around. Maybe, one day, they’ll emerge again, in another book or two. After all, I’ve got the bug.

Many thanks for visiting today Kathryn. I’m so glad you listened to your wise coffee drinking friend.

Good luck with Thicker than Soup and all your future stories!