I’m thrilled to welcome the lovely R J Gould to my site today- a.k.a Richard Gould. This is an excellent blog, which asks a very important question.

At the outset I should point out than I’m a male author writing romantic fiction – my photo is a giveaway. I’m not unique, but I am a rarity. Like Jenny, I’m a member of the Romantic Novelists Association and I first met her at the 2015 annual conference when over 95% of participants were female. Also like Jenny, I’m published by Accent Press, my novels sit in the Contemporary Women’s Fiction category. I do sometimes wonder whether I should sign up to Male Romantics Anonymous on the assumption that the counselling might morph me into a crime or espionage writer.

But hang on a minute. Romance is about the creation and nurturing of relationships and more or less fifty percent of those involved in this activity are men. So surely there should be as many male writers and readers of romantic fiction as females. Traditionally, the romantic novel has featured a woman’s quest for a male along a pathway fraught with challenges due to inequality between the genders. In modern society women can be more powerful, more sexually and socially confident, and more successful than men. They can take the lead in starting, maintaining and ending relationships. My writing is as likely to feature insecure men and confident alpha females as the other way round, which does no more than reflect the real world.

The romance genre is a broad category and what I write perhaps sits on the fringes – I certainly don’t do starry-eyed fiction. My protagonists are often middle aged with juggernaut loads of baggage to offload ahead of starting a new relationship or strengthening a current one. Humour, often dark, is an important element in my novels. My readers are predominantly female; feedback indicates that they appreciate the insight provided by a male author writing from the male protagonist’s point of view. If you do read anything of mine, I’d be interested to discover whether you feel there’s a clear distinction between my writing and that of female authors.

The occasional male reader turns up, in fact my favourite ever review was written by a male, his comment including: “…the characters are recognisable in an East Enders meets F. Scott Fitzgerald sort of way, that twinning an art in itself.”

I think one aspect of my work that puts it in the romance category is that it’s character driven. Of course plot is essential, but for me the starting point, beyond a decision about the broad theme, is always character. My inspiration comes from observing people, followed by the make believe about their thoughts and actions. I get to know them as the story unfolds; they grow as the plot develops and frequently drive the narrative forward. When I start writing I have the beginning and end point of a novel and some mid-story events that I want to include, but I don’t plan in detail at this stage.

My two published novels – ‘A Street Café Named Desire’ and ‘The Engagement Party’ –emerged from ideas sparked by actual events which set me off on a fictitious journey with fictitious characters. Two further novels, due for release either in late 2015 or early 2016, don’t have that real life starting point. Nothing Man begins with our hero plotting suicide (yes, it is humorous), and Jack and Jill Went Downhill traces the ups and downs of a relationship that begins at university on Fresher’s Big Party Night. 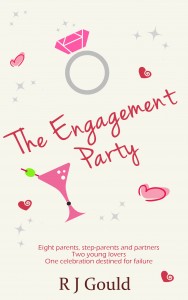 Wayne and Clarissa are a young London couple whose immediate families are about to meet for the first time. Trying to create harmony is going to be challenging because there are eight parents, step-parents and partners to deal with. Wayne comes from a working class background and Clarissa, an upper-middle class one, a further potential cause of tension. They are deeply in love, but friction arising from the forthcoming gathering has created a rift, and it’s touch and go whether their relationship is strong enough to survive the event.

‘I’m sure you’ll be very happy, dear,’ her mother had said when she’d broken the news of their engagement. It had been a statement of great craft in indicating the exact opposite of what the combination of words superficially suggested. It was accompanied by the look that Clarissa had been subjected to many times over the years – smile to smirk to frown to smirk to smile. She knew exactly what was implied; “you silly girl, you’ve made another wrong decision and I’ll be the one who has to pick up the pieces.”

‘Have you told your father yet?’ she then asked, all part of the post-divorce competition for attention and preferential treatment. Clarissa ignored the question, not wanting to give her mother the pleasure of knowing that her father had still to meet her fiancé. That evening she’d popped in to give him the news.

‘Where does he work?’ he’d asked, ahead of even knowing the man’s name.

‘He delivers sandwiches,’ she’d replied with mischievous deliberation. There followed a rare moment of paternal speechlessness. ‘His name is Wayne,’ she’d added. Her father had responded with a patronising nod, indicating that he thought the name highly appropriate to the trade.

Clarissa recognised that her father was a complete and utter snob and her mother was a close second. And if pushed she would happily admit that she was too – a product of her parents, enhanced by fourteen years at prestigious independent girls schools. She was well versed in the subtle nuances of dress, style, behaviour, and expectations that went with upper-middle class status. Her ‘you can have everything you want’ only-child upbringing was poles apart from Wayne’s experience of relative poverty, a broken home, bog standard comprehensive schooling, and a flight from education at sixteen. Although her parents had also separated, it wasn’t the same as for Wayne – for a start the split hadn’t brought on any money problems. 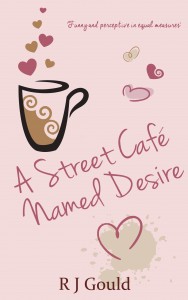 When David meets Bridget at a school reunion, he unexpectedly finds himself falling for her. With problems at work and a failing marriage, David feels he’s going nowhere, and mysterious, enigmatic Bridget draws him out of his shell. He’s overjoyed when, against all odds, she returns his interest, but what is it in her past that makes her reluctant to reveal her true feelings? As their relationship progresses, David starts to think he may realise his dreams – but will he get everything he wants, or is it all too good to be true?

He was forty-three. Autumn shouldn’t be such a surprise any more, but the annual explosion of colour never ceased to amaze him.

Here they were at their twenty-five year school reunion, crowded around the bar area of the upmarket Hotel Marlborough in Henley. Huge sash windows provided a magnificent view of a fast-flowing, grey River Thames. Rowers were flying downstream. Beyond the river was a steep bank with a dramatic display of early autumn trees.

Turning, he was clamped in a bear hug by a woman whose strong grip took his breath away. A face with two scarlet lips came hurtling towards him. His desperate attempt to avoid impact failed and their lips collided.

What did this ‘incredible’ mean? That he’d hardly changed? That he’d transformed beyond imagination? She stepped back and her vice-like grip transferred to his shoulders.

How long would this continue – wasn’t she going to advance the conversation? He knew he was David. Obviously she did too. Unfortunately he couldn’t assist because his natural response – hello Alice, hello Barbara, Clare, Diane, Elizabeth, Fiona, or whatever – was impossible. He had no idea who she was. 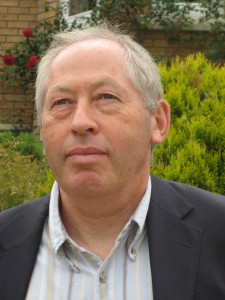 Richard lives in Cambridge and works for a national educational charity. He has published in a wide range of journals, newspapers and magazines on social mobility and educating able young people. His fiction, writing under the half-hearted pseudonym R J Gould, is contemporary, humorous, and loosely romantic. He joined the New Writers’ Scheme of the Romantic Novelists Association and soon afterwards, was taken on by publisher Accent Press. ‘A Street Café Named Desire’ was released in December 2014 and ‘The Engagement Party’ in May 2015.  R J Gould is a member of Cambridge Writers, where he leads the Commercial Editing Group. He was the organisation’s short story competition winner in 2010, awarded third place in 2015, and his writing was commended in 2012 and 2014.