It’s the end of the month- which means I’m handing over to the fabulous Nell Peters. This month’s blog is quite incredible- you have to read it! Where else could you read about notorious killers alongside a cockerel and Angela Lansbury?

Over to you Nell….

Thanks, Jenny, and hello everyone! Here we are again, happy as can be? It’s OK – I didn’t sing. Really; ask the neighbours, although you might want to wait until they’ve had their surgically-implanted earplugs removed.

One of the highlights for me this month has been the unexpected arrival of Vladimir – nothing to do with that rather scary Mr Putin, the Russian President who refuses to keep his shirt on, or a champion in something called League of Legends. I have no idea what that is, so let’s move swiftly on. My Vladimir arrived in a classy gift wrap of plastic bag and now resides in the garden. I have another fowl! 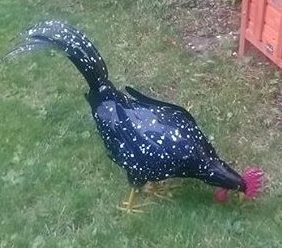 But before anyone starts predicting murder most foul J, flying feathers and a bad case of feline indigestion, let me explain that Vladimir is a sculpted metal cockerel. Sons #3 and 4 gave him to me to soften the blow of losing Pavlova and Svetlana, whom I still miss – especially during my early morning garden strolls, when they would gambol up to me, noisily demanding food. The sons chose a black model over rusty red because it was closest to Svetlana’s plumage, and she was actually given to me, as opposed to Pavlova (a very attractive redhead) who turned up uninvited and decided to make herself at home – to rule the roost, as it were. As #4 said, ‘Let’s see how Killer Kat rocks this bad boy.’ So glad his school fees weren’t wasted…

30th September marks the birth in 1924 of Truman Streckfus Persons – you don’t get many of those to the pound – better known later as Truman Capote, the American novelist, screenwriter, playwright, and actor. You didn’t get an invitation to his birthday bash? Me neither – possibly because he didn’t have our addresses, or he’s using the excuse he’s been dead for a while (a mere thirty-two years, which is really no defence at all). Never mind, we’ll treat ourselves to a birthday Breakfast at Tiffany’s in his honour, shall we? Gluten free croissants for me, please – aka cardboard cut-outs of the real thing. And I mean cardboard. I bet Connie Gustafson didn’t have such a boring diet. Who she? The character Holly Golightly started life as Connie, became Holiday Golightly and – I imagine much to Audrey Hepburn’s relief – ended up as Holly G. 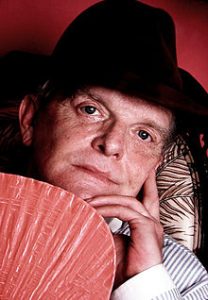 Capote was not averse to picking fights with others, one of whom was another celebrated US writer, Gore Vidal (bit of a competition for the weirdest name going on here, although Gore was born Eugene, so cheated a bit) – a man equally famous for his own feuds. Capote once said of Vidal, ‘I’m always sad about Gore – very sad that he has to breathe every day.’ To which Vidal retorted, ‘Truman made lying an art form – a minor art form.’ Boys, boys, less of the bitchy remarks! Play nicely, or I will have to rescind gobstopper privileges. It was Vidal who got the last laugh however, when Capote died many years before his own demise, and he described the death as, ‘A good career move.’ Meow! Probably just as well Twitter hadn’t been invented when they were at each other’s throats, or they’d never have written anything except 140 character insults. 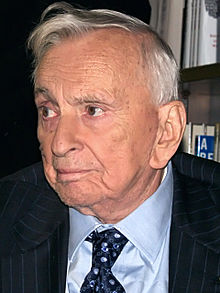 What else has happened on this day over the years? I’m so glad you asked.

My favourite event – and only because I have the most basic (some might say truly pathetic) sense of humour – is that Samuel Slocum patented the stapler in 1841. Now, I’ve never actually seen the TV programme Are You Being Served? just occasional excerpts – but even I know about Mrs Slocum’s pussy. So, apologies to Samuel S for not affording his magnificent invention the deference it deserves, and will everyone else please excuse me for a moment while I drag my mind from the smut gutter. Thank you.

Sticking with that oblique reference to broadcasting, in 1967, BBC Radio 1 hit the airwaves, launched with Tony Blackburn’s melodious tones and Flowers in the Rain, sung by The Move. (I now have the damned song rattling around my head!) I imagine all the ex-pirate DJs from Radios Caroline (as in Kennedy) and London that the Beeb employed for their new station, were mighty happy to have their feet back on terra firma at last – rampant seasickness can’t be too good for the creative juices. I wonder how many of those DJs are still around – and of those who have popped their clogs, how many were buried at sea for old times’ sake. Just asking. 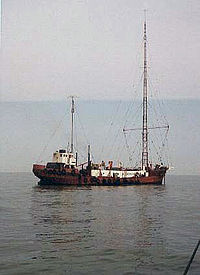 During various decades, The Flintstones, The Jerry Springer Show and Murder She Wrote debuted on this day. I love MSW – if I turn it on, it’s guaranteed to send #3 son scurrying for the sanctity of his room and his mega-huge TV, to watch something decent on Sky. Result! Awful mother? Me? Not at all! He returned to live rent free at the happy homestead for an agreed three month period over a year ago, ergo I have the patience of a saint – and if I briefly have to watch Angela Lansbury galumphing around righting wrongs, while everyone else in Cabot Cove meets a sticky end, to achieve a whole evening of peace and quiet, then so be it. Love or hate the programme, you have to admire the actress herself – almost ninety-one and still treading the boards. Only two years ago she played the eccentric medium Madame Arcati in a London production of Noel Coward’s Blithe Spirit, to great acclaim. Way da go, Angela! 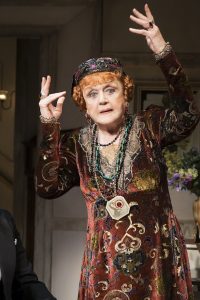 30th September 1888 was a Sunday, which Elizabeth Stride and Catherine Eddowes probably wished they’d observed as a day of rest, when they encountered Jack the Ripper and became his latest victims in the early hours of the morning. Elizabeth was Swedish and known as Long Liz – she was fond of a tipple and, with scant prospects of finding employment, had turned to prostitution to fund the booze, after her marriage broke up. She was killed first and about the time that her body was being discovered, Catherine (aka Kate), was released from Bishopsgate Police Station, where she’d spent a few hours in police custody in a drunken stupor. A cruel twist of fate if ever there was one. Her back story was much the same as Elizabeth’s; alcoholism fuelled by meagre earnings from prostitution. 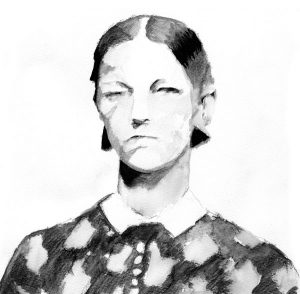 There’s a theory that whoever Jack was, he (perhaps she?) was disturbed while killing Elizabeth, because – apart from a slit throat, which can’t have been too pleasant – she didn’t suffer the grotesque disfiguring injuries inflicted upon other victims. Catherine, however, wasn’t so lucky and was subjected to a frenzy of mutilation – far more extreme and haphazard than any other victim, poor thing. I think we can safely assume Jack was majorly peed off at being interrupted first time around. How exceptionally scary life must have been on the streets of Whitechapel for ladies of that ilk, during the Ripper’s mercifully short reign. 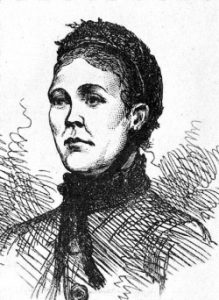 Incidentally, one DC Walter Dew of the Met, claimed in his memoirs to have discovered the body of the Ripper’s final victim Mary Jane Kelly, ‘The most gruesome memory of the whole of my Police career.’ 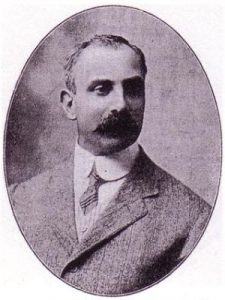 Whilst his version of those events is challenged by some Ripperologists, Dew did rise through the ranks to Chief Inspector, and was responsible for the arrest of Dr Hawley Harvey Crippin, homeopath (and another contender for the odd name prize) for the murder of his second wife, Cora in 1910. Cora (born Kunigunde Mackamotski – I believe we have an outright winner!) was a music hall singer whose stage name was Belle Elmore. 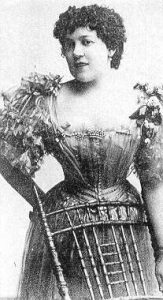 Poor old Doc C must have been feeling the tiniest bit smug as he sailed up the St Lawrence to Quebec City onboard the SS Montrose, along with his mistress, Ethel Le Neve disguised as a boy. Then DCI Dew spoiled any plans they might have had for a new life in the colonies by catching a faster ship, the SS Laurentic and reaching Quebec first. Crippen was the first criminal to be captured with the aid of wireless communication, after Dew telegraphed the captain of the Montrose to warn him of his dodgy passengers. 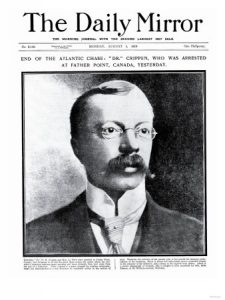 But Crippin was such a silly Billy – if he’d sailed to America, being a US citizen it would have taken an extradition order to secure his arrest and return to the UK. But once he entered Canadian territory and became subject to the laws of the British Empire, he was Dew’s for the rattling of handcuffs. The jury took just twenty-seven minutes to find him guilty and he was executed by hanging a few months later at Pentonville Prison. Tried separately, Ethel was acquitted as an accomplice, married, had two children and lived to be eighty-four. 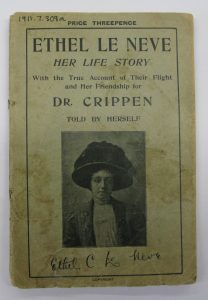 Like Angela Lansbury, my dad is ninety-one – but he doesn’t remember what happened two seconds ago, let alone have the ability to retain all those lines and deliver them with aplomb. He rarely gets out of his chair, waving his walking stick and shouting orders at everyone, expecting to be waited upon hand and foot – perhaps that’s what comes of being raised in a household with servants. I’ll never know. His latest fancy is that my mother (or ‘that woman’, as she has become) is trying to murder him – and, frankly, who could blame her? I so want to be like Angela …

When Dad was in hospital recently, the OH and I left after visiting him and, while we were driving back to my parents’ house, a biker pulled up uncomfortably close to ride parallel. Gulp. It was hot and we had the windows open, so were sitting ducks –     when he leaned into us, black helmet gleaming, my life flashed before my eyes. ‘Your lunch is on the roof!’ he yelled. Doh! The OH had grabbed a sandwich on the way out to the car park and done the classic, bad comedy thing, leaving it on the roof when shoving stuff onto the backseat. Then he forgot all about it and drove off. Cue huge sighs of relief all round and a swift wrench of the steering wheel to pull over and retrieve said sandwich.

Nell Peters’ Amazon author page has a potted bio and tells you what books she has written. Find it here: Author.to/NellPeters

Amazing!!!! Another brilliant blog. Thank you so much Nell!

Guest Post from Ellie Holmes: Why all need a cheerleader