Today I am delighted to introduce one of my fellow Accent writers, the brilliant Betsy Tobin. Here’s a book that would be a welcome addition to any Christmas stocking!

Over to you Betsy…

Sometimes we writers must meticulously concoct the plots of our novels from a vast cauldron of raw ingredients. And sometimes the story is quite literally handed to us on a plate. Happily, such was the case with my latest book, THINGS WE COULDN’T EXPLAIN, a comic novel about Virgin Birth.

More than a few years ago, I sat down to write a novel about faith in America. I knew the story would revolve around a small town in the Midwest besieged by miracles. And I knew a handful of other details: it would be set in Ohio in the late 1970s, the landscape of my youth; and the story would feature a young, blind protagonist. (Mistakenly I thought this might absolve me from writing a lot of physical description—how utterly wrong I was!) Lastly, I knew the plot would involve both a miraculous conception and a series of Marian apparitions.

Beyond that I hadn’t a clue, so I set about doing some research. I quickly learned that far from being rare, Marian apparitions were a dime a dozen (to borrow an American phrase.) Over the centuries the Catholic Church has officially investigated hundreds of reported sightings of the Virgin Mary. Many of these were cases involving only one or a few individuals (such as those at Lourdes and Guadalupe) but some of the most famous sightings (Zeitoun and Fatima, for example) involved literally thousands of witnesses. Over the years, the Church has deemed about a dozen of these cases to be genuine and therefore worthy of belief (though interestingly, belief is never required by the church.)

Some of the most famous examples have taken place in relatively exotic locales (Japan, Rwanda, Bosnia.) And not surprisingly, most have occurred in countries where Catholicism is widely practiced: France has more than its share, as does Portugal. But as this was an American story, I focused on those that had taken place in the US. Within a few days I turned up a relatively obscure news item from a small town in northern Ohio. Hallelujah!

The headline read: Curious and faithful flock to shrine where teen reported heavenly visit. In the tiny town of Ellsworth, Ohio, over the long, hot summer of 1991, local residents claimed the Virgin Mary appeared regularly in the sunset over a two-month period, and a teenage boy took to preaching nightly to the crowds that gathered there. The sightings were never investigated, much less authenticated, by the Catholic Church, and the story was never covered in anything but the local press. At the end of the summer, the apparitions ceased. 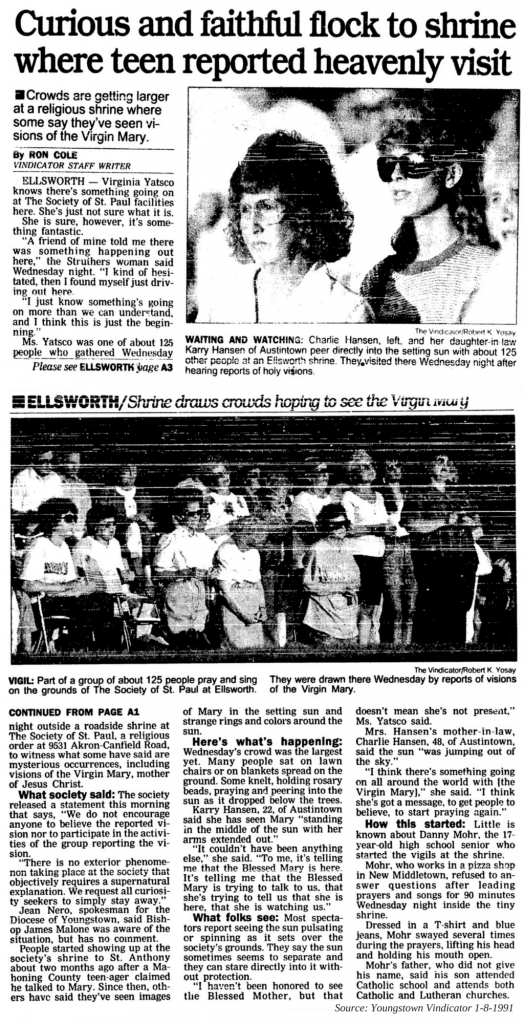 For me, that news story was manna from heaven. I already had Annemarie, the blind, chaste, seventeen year-old who finds herself inexplicably pregnant at the novel’s outset. And now I had Ethan, the teenage boy whose hapless two-year quest to win her love forms the backbone of the narrative. At the novels’ outset, Ethan has barely stepped foot inside a church. (‘I always thought we could be Unitarian,’ his mother muses in the book’s early pages. ‘If you could be bothered,’ Ethan counters.) But when he encounters a vision of the Virgin Mary by the town’s wayside shrine, Ethan quickly decides that maybe he’s a believer after all. And before long he discovers that the road to faith can be a perilous one…
Betsy Tobin’s THINGS WE COULDN’T EXPLAIN is published now by Accent Press.

You can find Betsy  here www.betsytobin.co.uk  and on Twitter  @betsytobin

Many thanks for dropping by today Betsy – Happy Christmas!