Today, I’d like to welcome debut novelist, Sharon Black, to my site, to tell us all about writing her first work of fiction, and what inspired its creation.

Over to you Sharon…

HI JENNY, thank you so much for having me here on your blog today. I’d like to tell you and your readers a little about myself and my inspiration for my debut novel.

My background is in journalism. After I left college, I worked as a features writer for a national newspaper here in Dublin. I married and took a substantial break from paid work, when my children were small, before returning to write for another national paper for a while.

By the time I was ready to write a novel, it seemed natural for me to write about what I knew. 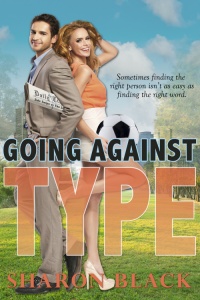 Going Against Type is a romantic comedy, it’s set in the world of Dublin-based national newspapers. Because the setting was familiar, I wanted to push myself out of my comfort zone in other ways.

Going Against Type tells the story of rival newspaper columnists, who write under pen names, and unknowingly fall in love with their arch enemy: each other! They each have good reason to protect their alter egos. So their relationship develops, each blissfully unaware of whom the other is. Until they are forced to reveal themselves….

My inspiration for the book was the 1940s Hollywood film, Woman of the Year, starring Katharine Hepburn and Spencer Tracey. I loved all their films! Hepburn plays a high brow pundit, who rubbishes sport in one of her columns. Tracey is a sports columnist who leaps to defend his beloved sport and in turn, attacks Hepburn’s views, and the fun begins. In the film, however, they meet quite quickly and despite knowing who the other person is, they fall in love.

In Going Against Type, I turned the stereotypes around. So Charlotte ‘Charlie’ Regan is the sports buff. At the beginning of the story, she is given a chance to write the new, anonymous sports column, Side Swipe.

My hero, Derry Cullinane is a fashion writer and gossip columnist, The Squire for the rival paper. He’s sophisticated, man-about-town and a bit of a playboy. They fall in love, and that’s where the fun begins.

While that whole build up was really fun to do, it was also extremely challenging. The main reason was that I to ensure that Charlotte and Derry’s columns were quite acerbic. That way, you could see a huge contrast between their views in the papers – their weekly banter – and how they were with each other. It also meant there was more at stake.

The hardest columns to get right were Charlotte’s. Paradoxically, she turned out to be a wonderful character to write. I know very little about sport, having never been sporty myself. But I admire people who are, and I wanted Charlotte to be very different from me. Because Charlotte’s a journalist, I didn’t want anyone to think I was writing bits of me into my heroine.

So I did a lot of research. I read a lot of sports columnists, I checked all my facts, and then I tried to put myself into the head of a feisty, twenty-something woman, working in an area that’s largely dominated by men.

Her columns took a lot of writing and re-writing. I wanted them to be sharp, funny and very controversial. And as her columns got better, the character of Charlotte became more defined and easier to write. In the end, she felt like a real person; somebody I had known a long time.

A lot of people are surprised when they see that my hero is a gossip columnist and fashion writer. Yes, there are exceptions to the rule, but mainly these are areas in journalism that tend to be dominated by women.

Quite apart from wanting to just shake things up, I wanted to write a strong male character, who is completely comfortable in his own skin, and his fabulous tailor made suits! He is manly, yet completely relaxed with having a female boss and working in a features department, surrounded by women. Actually, he likes that a lot!

It sounds like a terrible cliché, but writing this book was a huge learning experience. I had written short stories down the years, and had some of them published. And I’d started so many books – but had never finished them.

This time, I armed myself with the tools: the nuts and bolts of novel structuring. And I knew I had a good story. I was determined to see it through. I’m so glad I did. I became an author and I’m so grateful for that. And I’m very proud of my debut.

Note: Charlotte is sent to cover Ladies’ Day at The Galway Races. It’s here that she meets Derry for the first time.

‘So, did you get lucky?’ a deep voice drawled.

Charlotte spun to find Mr Panama Hat grinning down at her. Bloody hell, she thought, smiling back despite herself. Any other man she knew would look utterly ridiculous in what seemed to be a tailor made, striped linen jacket and trousers, combined with that damned hat. But he carried it off with a self-confidence that bordered on swagger.

‘Yes actually, I did,’ she admitted, still smiling. ‘What about you?’

‘I lost. My own fault. I took a flier on somebody else’s tip.’

‘I read some bloody sports columnist from Ireland Today. Had a few winners earlier this week. As I said, it’s my own fault. I never normally bother with racing tips. Whoever it is, he obviously doesn’t know a horse from a three-legged stool.’

‘So how much did you lose?’ she managed, trying to sound casual.

Charlotte stared at him in amazement. Who did that? Maybe he was a rich eccentric, the kind of guy who hung around the race courses, betting big. Not caring whether or not he won – or lost everything on the day. That said, she was damned if she’d come clean!

‘So do you normally gamble this recklessly Mr…?’ Charlotte trailed away meaningfully, biro poised over her notebook. He stuck out his hand, a warm smile forming.

‘Sorry I should have introduced myself. I’m…

‘Derry! Where have you been? They’re just about to start the judging. Come on darling, I have to go line up. I want you to be able to see!’

A tall blonde, wearing a rose pink knee-length dress with tiny matching jacket, pink stiletto sling-back shoes and a dizzy spiral of cream and pink headwear, teetered over and clung to Derry’s arm. She looked, Charlotte thought, vaguely familiar. The blonde smiled tightly at Charlotte and then noticed her press badge.

‘Oooh, you’re from the papers! Maybe I could talk to you when the judging’s over. Do you have a photographer with you?’ She didn’t wait for Charlotte to answer, but rushed on. ‘You’ll have to excuse us right now, okay?’

‘Of course, don’t let me delay you,’ Charlotte said, stepping back.

‘Wait,’ Derry began, shooting her a sudden intrigued look. ‘You’re not with Ireland Today, are you?’

‘Oh right.’ He frowned. ‘What about their Side Swipe columnist? Do you know him?’

Lie Charlotte. And do it well.

‘No. It’s being written anonymously. I think the writer works from home…’ She smiled brightly at him. Behind Derry, the blonde shot Charlotte a steely glare. Charlotte glanced one last time at Derry.

‘You should go. And I have to work. Nice to meet you.’ She turned and walked away… 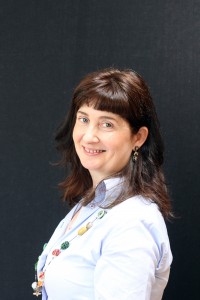 SHARON Black grew up in Dublin. She studied history and politics at University College Dublin and then did post-graduate in journalism at Dublin City University.

She has worked for national newspapers, including The Evening Herald and The Irish Examiner.

She had short stories published in U Magazine and won the 2010 Dromineer Literary Festival short story competition.

When she is not writing, she reads, walks and sees friends. She co-founded a local book club 14 years ago. She loves theatre, old Hollywood films, science fiction and good stand-up comedy.

She lives in a Dublin coastal village, with her husband and their three children.

Many thanks for visiting today Sharon, I wish you much luck with your new book.