I am honoured to be able to share this wonderful blog with you today from the Charing Hermit herself, Victoria Addis!

Over to you Victoria…

Love and Romance in Children’s Fiction

Love and romance are central themes, not just in literature but in life. Relationships forming, ending or carrying through into old age are the framework on which families, friendships and the ties that bind are built and tested. Where the intricacies of romantic love may take centre stage in adult and young adult fiction of any genre, the rules are slightly different when writing for children.

When thinking about romance in books for children, our first thought is probably of fairy tales, with their downtrodden Princesses and handsome Prince Charmings playing out a form of idealised love. The main characters in these stories are always teenagers or adults and usually one-dimensional. Without much cause for identification with the characters, children enjoy these stories for the excitement of the plot and the fun of the “bad guys”. The romantic element has its appeal in the security of familial love, and in the wish to play grown ups. 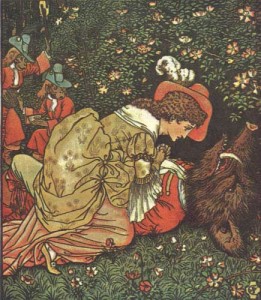 Contemporary children’s fiction usually features characters that readers can relate to. Main characters are usually children themselves and are either a type of everyman girl or boy thrown into strange circumstances such as Harry Potter or unusual characters that draw readers to them through their quirks, like the Baudelaire children from A Series of Unfortunate Events.

Romance in these novels is not centralised through the main characters as it is in fairy tales. Contemporary children’s fiction works with an undercurrent of romantic possibility in its protagonists and a backdrop of true romance, relationships and sexuality in its older, secondary characters.

Romantic relationships are just as necessary in children’s fiction as they are when writing for adults. In order to create depth in a fictional world, romantic love and its darker themes must play a part.

A Series of Unfortunate Events strikes this balance really well. The romantic possibility between Violet Baudelaire and the Duncan Quagmire opens up a bridge to the adult world while remaining within the understanding of a younger audience. The darker undertones of Violet’s relationship with Count Olaf and plot lines surrounding her sexualisation add depth to the general sense of danger associated with the novels “bad guy”.

In his Wardstone Chronicles (or Spooks Books) series, Joseph Delaney exploits romantic possibility in the uneasy friendship between the apprentice Tom Ward and the witch Alice Dean. Tom’s mistrust of Alice has a hint of misogyny about it, echoing the Spook’s treatment of his witch-wife Meg Skelton who he keeps locked up and controlled. As with A Series of Unfortunate Events, the romantic possibility plays into other themes, adding depth to the writing by illuminating feminist issues.

The Harry Potter series provides an excellent example of romance and romantic themes in children’s fiction, as it grows from children’s literature into the realm of young adult. The difference between the first and second halves of the series is marked.

At first, relationships are friendships filled with romantic possibility; Ginny’s shyness around Harry, Hermione and Ron’s constant sniping at each other, and they are complimented by romantic relationships in older, secondary characters, notably Percy Weasley and Penelope Clearwater. In later books, these relationships become more complex and emotional as the characters mature.

So, how do you write romantic possibility into your children’s book?

1)      All relationships are built on friendships, so introduce characters for your main characters to take an interest in or even to take a disliking to.

2)      Create tension by having your character respond jealously, dismissively, over- eagerly or with curiosity to them. These emotional reactions are the bedrock of romantic possibility and when used subtly can add great depth without having to lead to a romantic plot line.

4)      Use it for a reason- does it say something about your character that they respond with jealousy rather than curiosity? Does it make a larger point about fitting in, feeling wanted? Or does it relate to larger themes in your book, such as the treatment of women?

Of course, romantic relationships need not be a background feature in writing for children; you could always go all out and write a story of very first love. If romance is the central focus in a children’s novel, then the strongest elements will be friendship and curiosity. You can exploit playground knowledge of sex and relationships and the copying of adult behaviours or reach for something deeper with shared experience and meaningful bonds. However you decide to incorporate romance into your children’s novel, it should form a part of your fictional world to give it the authenticity of real life experience.

Victoria is a postgraduate literature student and children’s writer.