I’m delighted to welcome Tim Walker back to my site today. On this visit he is sharing a little of his search for King Arthur.

Over to you Tim…

The search for a tangible King Arthur remains as inconclusive as ever due to lack of compelling, physical evidence, although some continue to try and convince us otherwise. There are many places in Britain that lay claim to have connections to a ‘real’ Arthur – Tintagel where he was said to have been conceived; Camalat (South Cadbury in Somerset), an impressive iron age citadel; Glastonbury Abbey where monks in 1190 claimed to have found his grave; Camelford – a village in Cornwall that claims to be the site of the Battle of Camlann, where Arthur was mortally wounded around the year 515 AD (a date arrived at through research by historian John Morris). Avalon, or The Island of Apples, where Arthur’s body was taken, is thought to be near Glastonbury – its proximity to Camelford lending support to the claims of this patch of the West country. There are other ‘Arthurian’ sites at various locations in Wales, at Birdoswald on Hadrian’s Wall, and north of the wall at Caledonian Wood. 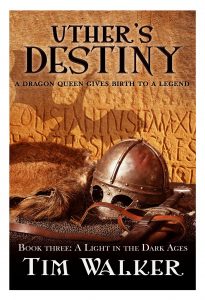 At the visitor centre near Camelford at the aptly-named Slaughterbridge, I followed a path to a low cliff above the River Camel and look across to the meadow on which Arthur is said to have fought his last battle. On the muddy riverbank below lies The Arthur Stone – a granite tombstone dated to 540 AD engraved with Celtic runes that have been interpreted as stating ‘here lies the son of Arthur’, throwing up the intriguing possibility that it was not Arthur but his heir who fought and died on this spot some years after his illustrious father (or that both father and son fought battles there, as the keepers of the visitor centre would like us to believe). Legend has it that the victorious Saxons desecrated his burial site and rolled the tombstone down to the riverbank where it remains to this day. Hold on a minute, did King Arthur have a son? In Geoffrey of Monmouth’s account, Arthur is succeeded by his cousin, Constantine of Cornwall.

In the absence of something more substantial from historians and archaeologists, these remain theories in the realm of legend. One theory is that Arthur may not have been a king at all, but a ‘leader of battles’ a ‘Dux Bellorum’ or a hired sword, working for a group of tribal leaders, in the immediate post-Roman era. Bernard Cornwell’s excellent novel, The Winter King, adopts this point of view.

Another perspective is offered by historical fiction author Chris Flynn (The Bear, The Dragon and The Wolf) who argues the case for a Northern Arthur who is a cavalry commander, possibly drawing on the influence of Sarmatian cavalry units once garrisoned at Hadrian’s Wall, who organises resistance to the spread of Anglo-Saxons in the north-east (www. botrbooks.com/blog). Also in this corner is Alistair Moffat, who puts forward the case for Arthur being a warlord based in the Scottish borderlands north of Hadrian’s Wall in the years after Roman evacuation, in his book, Arthur and the Lost Kingdoms. His book builds a case based on literary sources, historical documents and interpretations of place names to build a compelling and intriguing case for a Scottish Arthur. Add this to the Welsh chroniclers’ Arthur, and you have a folk hero claimed by three home nations. 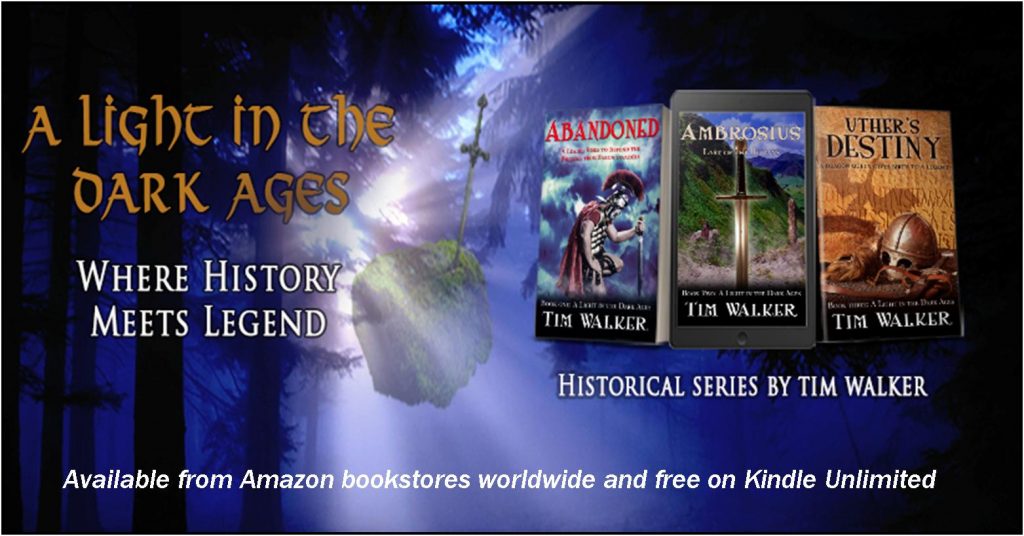 Clearly, it was a troubled time for the Britons, left exposed by the removal of Roman protection. However, there is no physical or archaeological evidence for who the leaders were, where battles took place and when. It has been suggested that the legend of King Arthur is a composite of the feats of a number of Briton leaders over a broad period stretching from the mid-fifth to the mid-sixth centuries, embellished by bards over the years until written down in 1136 AD by Geoffrey of Monmouth in his book, The History of the Kings of Britain.

Victories in as many as seventeen battles on British soil have been attributed to Arthur, plus his overseas adventures, giving credence to the notion that this was not the work of one leader but of several – collapsed together for the purposes of engaging storytelling by bards to make one great heroic figure who battled to preserve a Romano-Briton way of life.

Contemporary historian, Miles Russell (writing in History Revealed magazine), has re-examined Geoffrey’s claim that the inspiration for his work was based on an ancient book ‘in the British tongue’ and found that it may have some credence (despite the source text never having been found or mentioned by any other). To support his theory he uses as an example Geoffrey’s telling of the coming of Julius Caesar in 55 and 54 BC – an account that has similarities to the ‘official’ Roman version but differs in some details and is told from a British point of view. Geoffrey certainly did his homework, poring over source material as diverse as folklore, chronicles, church manuscripts, king-lists, dynastic tables, oral tales and bardic praise poems.

In Geoffrey of Monmouth’s ‘history’ we get a compelling story of a time of desperate struggle following the end of Roman Britain. He gives us a linage of Fifth Century kings – Constantine, Vortigern, Ambrosius Aurelianus, Uther Pendragon and then King Arthur.

Arthur becomes king at the age of fifteen and marries Ganhumara (‘Guinevere’) who is from a noble Romano-Briton family. Arthur forms an alliance with his nephew, King Hoel of Brittany, and they inflict defeats on the Saxons at Lincoln and Bath before crushing a combined force of Picts (Scots) and Hibernian (Irish) tribes at Loch Lomond. They then attacks Ireland, the Orkneys, Iceland, Norway, Sweden and parts of Gaul (France), forcing the people to pay them homage. He lays waste to fields, slaughters the population of these places and burns down their towns – the exact opposite of a chivalric king. Geoffrey’s Arthur is an arrogant, aggressive and brutal warlord who kills and takes what he wants.

But Geoffrey’s story does not end there – Arthur is summoned by the Roman Emperor to face charges of war crimes and responds by raising a large army, sailing to Gaul, and meeting the Roman army in battle, defeating and killing the emperor. Arthur’s mind is set on capturing Rome, but he is forced to return home at news that his nephew Mordred has taken his queen, Ganhumara, and seized the kingdom. In a bloody civil war in which thousands die, both Mordred and Arthur fall in battle – Arthur’s body is taken to the Isle of Avalon and he is succeeded by his cousin, Constantine of Cornwall.

This is a summary of Geoffrey’s account in his Historia, and it is an intriguing thought that he MAY have taken it from a lost manuscript. Later generations lightened the blood-soaked narrative, adding more sorcery, the romance of Camelot, chivalric heroes (the knights of the round table), the quest for the Holy Grail, an evil foe in Morgana, and a doomed love triangle involving Arthur, Guinevere and Lancelot.

Despite the fanciful tale of Arthur taking on the might of the Roman Empire, there is still the possibility that Geoffrey’s account was largely based on genuine source material that offers a glimpse of native Briton resistance to foreign invaders in the fifth and sixth centuries. Geoffrey’s King Arthur could not possibly have done all those things – he is most certainly a composite of several characters, including Ambrosius Aurelianus, who perhaps has better credentials as a noble leader who led the Britons to early victories over the Saxons.

Clearly, there was organised resistance to invaders, and tales of bravery told by chroniclers and bards from the Briton resistance point of view – and perhaps missing texts. Arthur is the embodiment of this oral tradition from the fifth and sixth centuries, offering us intangible glimpses of deeds in a period wedged between the gloating records of Roman and Anglo-Saxon conquerors.

In the year 467 AD Britannia is in shock at the murder of charismatic High King, Ambrosius Aurelianus, and looks to his brother and successor, Uther, to continue his work in leading the resistance to barbarian invaders. Uther’s destiny as a warrior king seems set until his world is turned on its head when his burning desire to possess the beautiful Ygerne leads to conflict. Could the fate of his kingdom hang in the balance as a consequence?

Court healer and schemer, Merlyn, sees an opportunity in Uther’s lustful obsession to fulfil the prophetic visions that guide him. He is encouraged on his mission by druids who align their desire for a return to ancient ways with his urge to protect the one destined to save the Britons from invaders and lead them to a time of peace and prosperity. Merlyn must use his wisdom and guile to thwart the machinations of an enemy intent on foiling his plans.

Meanwhile, Saxon chiefs Octa and Ælla have their own plans for seizing the island of Britannia and forging a new colony of Germanic tribes. Can Uther rise above his family problems and raise an army to oppose them?

Book three in A Light in the Dark Ages series, Uther’s Destiny is an historical fiction novel set in the Fifth Century – a time of myths and legends that builds to the greatest legend of all – King Arthur and his knights. 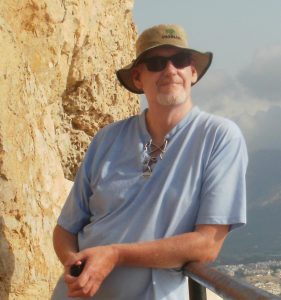 In my historical book series, A Light in the Dark Ages, I have attempted my own alternative history of the period starting with the departure of the Romans and building to the coming of King Arthur, putting flesh on the mythical bones of early kings Vortigern, Ambrosius Aurelianus and Uther Pendragon – lighting the way for the coming of King Arthur.