Guest Post: Caroline Burch: The Diary of a Mother, Her Son, and His Monster

Today I am delighted to be able to introduce Caroline Burch, on the second day of her blog tour.

Caroline has written her first book; an incredibly moving account of her battle- and more to the point- her son’s battle- against cancer.

Over to you Caroline… 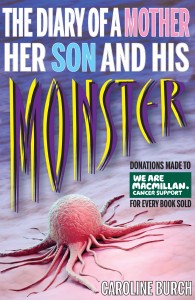 ‘The Diary of a Mother, her Son and his Monster’

Welcome to day 2 of my blog tour!

Here is the blurb….

Caroline Burch experienced every parent’s worst nightmare when her son

Elliot was diagnosed with cancer aged just six months old. To document her

treatment and the emotional anguish of their situation from diagnosis to

Ten years later, and with Elliot happily recovered from the condition that

threatened his life, Caroline looks back at the traumatic months when there

appeared to be no end in sight to the misery.

children emerge from their nightmare.

How does this book differ from other books?

During my son’s chemotherapy and treatment, I began to imagine the cancer as a dangerous living creature. I could visualise this sly, snarling monster, evil and pulsating within my baby. It was an awful way to think and imagine things, but it was very much how I visualised it. I gradually grew to hate this monster, this vile, breathing thing which I imagined was munching away inside Elliot, killing him slowly.

During the treatment and hospital admissions, I talked to Elliot about this monster and told him that he needed to fight against it, be strong and kill it. I saw it as a battle between good and evil, despite knowing that this was completely absurd. Of course, at 6 months, he could not understand a word I was saying, but it seemed to help me. I could visualise it and it gave my hatred a focus.

As soon as I began to see my writings as a possible book, I knew that I needed to include this ‘monster’ as a living entity. It was important to me that I convey what this thing meant to me and how I imagined it during the time it was living in my son. I then developed this into a set of Acts, thirteen in total, which describes the cancer’s living and thinking journey from being one living cell to developing into a mass the size of a small rugby ball.

These Acts are intertwined within the diary and represent the cancers development, exactly as I imagine it and based upon medical information and my own research about the development of Wilm’s tumour cancers.

Please visit me at carolineburch.com 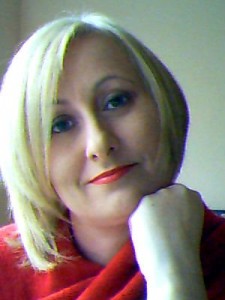 You can by a copy of my book from all good retailers, including-

Macmillan Cancer support will be receiving £1.00 per book sold. This is more than I, as the author, will receive. My aim is to make £1,000,000 for Macmillan. Please support this campaign; spread the word, treat yourself and buy as presents for other people…it is an amazing cause…

Below is the very first act as taken from my book. I hope you enjoy.

I was just one single cell when I was created; caused by a tiny mutation in the DNA structure of one minute cell. I should have died by a process called Apoptosis, where the fault or mutation is recognised and the cell automatically dies or is destroyed quickly, but I did not die. My mutation lived inside her, contained in a sac that was only one centimetre in diameter.

I quickly divided into two cells, called daughter cells. The process of destruction had begun. I was programmed to multiply, develop and grow strong in this tiny protective bubble.

I am here, all cosy and warm, embedded in his left kidney. I am now six cells. I have an ability to rapidly reproduce. My clever, cunning ability will ensure my survival. I am quick and I am silent. I know where to hide in my home. I have buried myself deep into his left kidney. I will grow bigger and stronger as each day passes. I will be able to stay undiscovered for a long time, but I will be here, causing destruction and mayhem where there should be joy and laughter.

This poor boy has no chance. I am programmed for death. I am ready to do battle and I will win…

I wish you great success with your amazing work.

BOOK LAUNCH PRESS RELEASE for Another Cup of Coffee