For this week’s opening lines, I’m delighted to welcome F J Curlew with the first 500 words (exactly) of her novel, Dan Knew.

A Ukrainian street dog is rescued from certain death by an expat family. As he travels to new countries with them a darkness grows and he finds himself narrating more than just his story. More than a dog story. Ultimately it’s a story of escape and survival but maybe not his.

The world through Wee Dan’s eyes is told in a voice that will stay with you long after you turn that last page.

The animals in this book are all real, as are their stories. The people’s names have been changed to protect their privacy. Fact or fiction? Well, dogs can’t talk, can they? 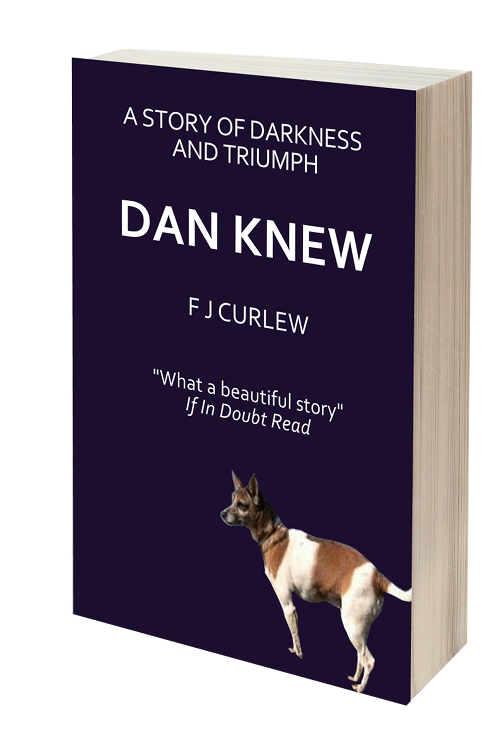 I knew it was going to be a bad day: the worst day. The bathroom was full of wasps, buzzing and buzzing. I could hear them from my bed. She screamed, “What the hell am I going to do now? Shit!” I tried to move: to help her, but I couldn’t.

The End Of The Beginning

It was so hot. Too hot to be out in the sun. Safer here in the shadows. Safe from the heat, from the dangers of daytime. The ground was dry and dusty and I could smell the burning of the sun, feel it licking at the walls all around me.

I was with my family: me, my brother and sisters, and my mother. I wasn’t very old and still needed my mother to help me get food, to look after me. She wouldn’t let me feed from her any more; she brought back food instead.

I wanted to hunt. To go out with her. ‘Not yet’, she growled. ‘Not yet’: her teeth bared, her eyes narrow. I knew that meant stay. Serious stay.

We were living under a building. There was a hole we could creep through that led to an almost-underground place, and it kept us safe. We had to hide from a lot of things. From the noisy, big machines that could run faster than us. They would kill us, squash us flat! I had seen it once. A dog that wasn’t quick enough. Trying to get that last piece of food. Snatching at the ground. Eyes staring. A bad noise. The body of a dog.

When the machine had gone I watched, as the other adult dogs sniffed the air, then walked towards it, slowly, slowly, checking all around. Noses high, hackles raised, senses on alert. Fresh meat. They pulled at it, tearing bits of flesh from its body. Growling and snarling at each other.

The stronger dogs ate first. I watched my mother edging forwards, trying to sneak her way to the front. A quick dash, a snap, a growl, and she was running back with meat in her mouth.

I ate well that day. I knew it was dog, but it was dead. It tasted good. Better than the usual scraps that we ate most days. We were hungry a lot of the time, you see. When food came we ate. It didn’t matter what it was.

My mother was out trying to find something for us to eat. I could hear her rummaging through the garbage cans, snuffling through bits of paper and plastic. If she found something she would try and hide it from the others. Run back to us with it before they saw her. There were many of us, you see. Lots of dogs living around here, and we had to fight some of the time.

Well, the adults would fight and we would watch, learning, practicing, waiting, until it would be our turn. Usually it was about food, sometimes territory; some other dog wanting our place. Our patch. Occasionally… 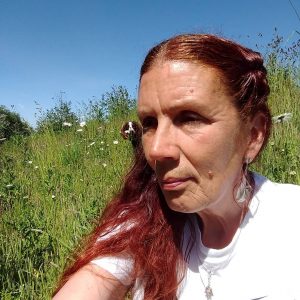 Fiona dropped out of school aged 15, because being the consummate rebel, she hated it! After becoming a single parent she decided to return to education, graduating in 1996 with an honours degree in primary education. Ah, the irony!
As soon as she graduated she packed everything she owned into her Renault 11, including her daughter, two dogs and a cat, and headed off to Estonia to become an international school teacher. After fifteen years of teaching, predominantly in Eastern Europe, she returned to the UK and had a very serious battle with a particularly nasty cancer.
She now lives on the east coast of Scotland with her Springer Spaniel, Brockie. who keeps her on her toes! Her mornings are spent on huge dog walks in the beautiful East Lothian countryside, her afternoons writing. Oh, and there’s a disgruntled Portuguese cat who, quite frankly, preferred sunning herself in Portugal!

Fiona is the author of two books:

To Retribution – A love story/political thriller set in times of turmoil.

Dan Knew – A fictionalised account of her travels told through the eyes of Dan, her rescued Ukrainian street dog.

Thanks for fabulous opening lines Fiona. Of course dogs can talk….

Come back next week for some ore fabulous opening words,