So, you might be thinking that I don’t have anything new out for ages- and then it’s a book announcement every five minutes!

To some extent, you’d be right. After 18 months of concentrating on my medieval crime novels as Jennifer Ash – as well as writing the new Mill Grange series – it’s wonderful to be able to launch some romcoms as Jenny Kane again.

If you enjoyed your trip to the Penwith region of Cornwall with Abi, Max, Beth and Stan in A Cornish Escape– why not join them again as they meet a few new faces? 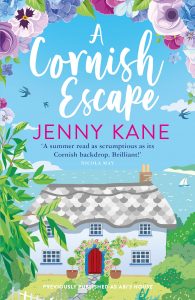 If you haven’t read A Cornish Escape, you can still enjoy A Cornish Wedding as a standalone read.

You can pre-order your Kindle or paperback here- mybook.to/CornishWedding