Being Brave, Drinking Coffee, and Coming Out- Writer Style!

It’s taken ten years for me to summon up the courage to agree to be interviewed locally about my work- not just my Jenny Kane romance side, but my Kay Jaybee erotica side as well.

It isn’t that I’m ashamed of what I do- far from it- but with the majority of my writing over the past decade being of an extremely kinky nature and, whether we like it or not, there will always be those people who will judge the erotica writer harshly for what they do. There are those who, without even reading the words, will label erotica as ‘dirty’ or ‘bad’, or ‘filth’ (which is a word I hate, and hurts me every time I hear it). Consequently, I’ve always held back from shouting about it on the home front.

At the end of this month however, I’m launching my Jenny Kane novel, Another Cup of Coffee in my local Costa, and so obviously my ‘Jenny’ side has to become known- and then I got to thinking, why not my ‘Kay’ side as well. Why not, after 10 years of being out there internationally, being open about my writing closer to home? 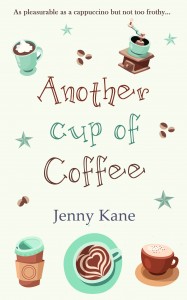 Obviously I asked my family first- my children in particular. They- as ever- were incredibly supportive, and with cries of ‘Go for it Mum’ ringing in my ears, I finally agreed to allow some cross genre PR to be published on my doorstep.

If you’d like to read the article in question, ‘Bondage to baristas with a few cups of black coffee’- then here it is…

This newspaper article came out this week, and what an odd but lovely week it has been! Sat in my usual spot in Costa, where I write all day, I’ve felt a little like I’ve been a goldfish in a bowl- but in a nice way.  I was beginning to think perhaps people weren’t covertly looking at me after all- maybe I was being paranoid and imagining the whole thing- until the staff told me that, no I wasn’t being paranoid, people really were staring at me! I can’t help laughing- it’s all so British- no one says anything, everyone just as a good ole look! Until yesterday that is- when three total strangers asked for my autograph and a lovely elderly couple came up to me to say how lovely my photo in the paper was- I’m still blushing!

On the other hand, no pitchforks or flaming torches have appeared to chase me down the street, no one has said anything horrid, or been unkind in any way- for which I am incredibly grateful.

I love my writing so much- I love that I sit in my little café spot everyday, sometimes writing romances, sometimes erotica, sometimes children’s stories. I’m so lucky to be able to do such a job all day!

So if you’d like to come along to my local Costa, pick up a signed copy of Another Cup of Coffee, then I’d love to see you on the 29th Sept! All details here.

I’d like to thank everyone at Costa for allowing me to take over one of their coffee shops so often, and to Tina at the Mid Devon Gazette for being so much fun!!

From the Bedroom to the Stable…Guest Post from Zara Stoneley