Guest post by Jon Hartless: How not to start a novel

Today I’m delighted to welcome author Jon Hartless, hot on the heels of the publication of his latest book, Full Throttle.

About four or five years ago, I had an idea. That idea was “Let’s write a steampunk motor racing story inspired by the era of the Bentley Boys.”

For those who don’t know, Steampunk is usually set in an alternative nineteenth century timeline in which technology had advanced to a greater degree than in reality, but the idea is flexible so please don’t feel that this definition is the only one. The Bentley Boys were very famous racing car drivers of the 1920s, beloved by the media for their wealth, social status, and derring-do racing lifestyle. This was at a time when most people still couldn’t even afford a car, never mind race one, and as such I thought the world of motor racing would be a perfect symbol for the gulf between the rich and the poor. 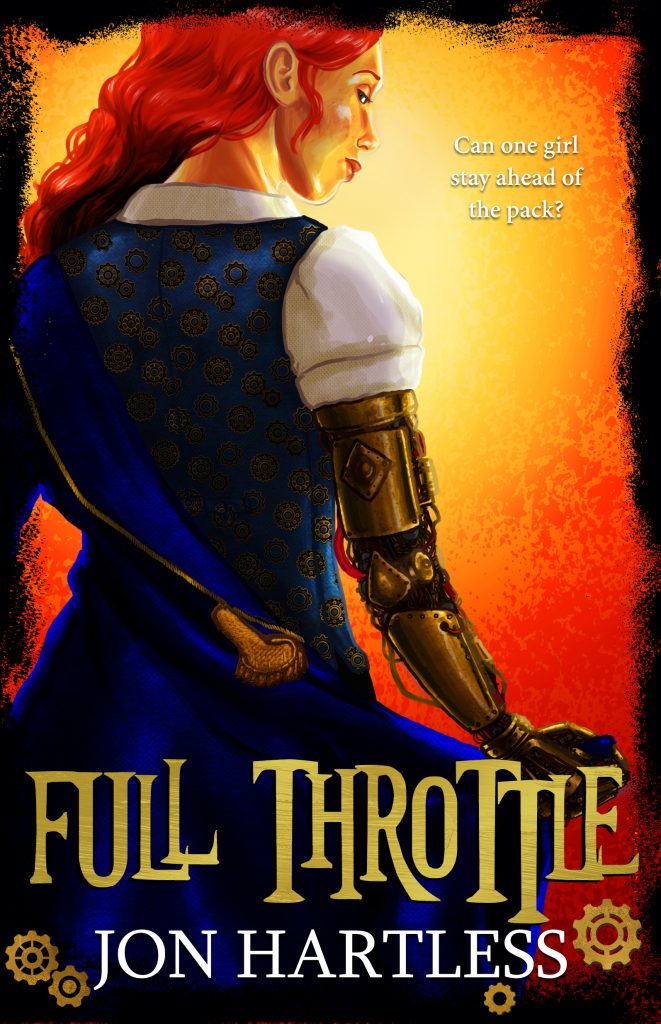 As ideas go, this one had quite a lot encoded within it. To begin with, this was to be a dirty, grubby Steampunk world, not a bright, shining version. Despite the presence of cutting-edge technology, my story would only feature glimpses of it, for only the wealthy elite would be able to afford it. This was to be a world very like ours, in which opportunity only exists for the rich and well-connected while everyone else is presented with the illusion of opportunity, a practice very familiar to us today.

And within this world we would focus on a young girl condemned to a life of poverty – material and intellectual – because of her working class background, her gender, and also her disability – she only has one arm, owing to a birth defect, and a weak knee from the same cause. But fortunately for her, her father has a small workshop and a secret project; a petrol engine designed specifically for motor racing. And there it was; an intelligent heroine named Poppy Orpington and a petrol-fuelled monster of a car called Thunderbus would rise up to challenge the racing elite and the social order, to smash conventions apart. Every piece slotted neatly into place.

And having thought of this, and having practically the whole thing in my mind, I then abandoned it to rewrite the core concept.  For no reason at all. Other than I was a complete prawn. For some reason I just lost faith in it and thought I’ll never get it accepted. Instead, I reimagined it as a book for young children, with large pictures on every page, where Poppy is a girl of about 8, whose eccentric father makes a car and they go off racing, towing a caravan behind them.

I then binned that idea and thought of making it a bit more “pulp”; in this version, Poppy – now a grown woman without any birth defect – is heading home from work one evening and is accosted by a sinister man who offers her 50 quid for something called Thunderbus. She has no idea what he’s talking about, and walks on. Then another man pops up and offers her 100 quid. Then two more agents appear and offer 250, and when again she refuses they attack her and try to take her prisoner. Poppy promptly goes Mrs Peel on their arses (old TV reference) and escapes. Back home she finds a letter from a solicitor saying very sorry, your father has died, and you have inherited everything; a small workshop, several debts, and something called Thunderbus.

So, Poppy visits the solicitor who gives her the keys to the workshop and says he has no idea what Thunderbus is. Poppy visits, the workshop, (and is probably attacked again by yet more sinister men), and finds that Thunderbus is a sort of small armoured tank with advanced weapons of the sort that has never been seen before and which will change the face of warfare, hence the many ominous agents want to get their hands on it and have killed her father in the attempt…

And at that point I gave up on that version, though it did briefly rise vampire-like with a new take, in that I thought; what if Poppy’s father knows it will take him about 15 years to make Thunderbus because of the complexity of doing it all alone, plus he knows that super-strength will be required to pilot the tank, and he looks at his baby daughter, asleep in her crib, and lops her arm off, thereafter telling her it is a birth defect and bringing her up to obey him in everything? The action would then jump forward to Poppy as a teen girl, worshiping her father as she has been brainwashed by him, and using her mechanical arm to use Thunderbus as her father commands, blowing up a bank here or a military installation there. The story would have then been of her ‘awakening’ as she realises the Mephistophelian nature of her father and rebels against him. But that idea died a death also. Thankfully.

And so, after all that, I finally thought, “hang on, what was wrong with the racing idea that practically wrote itself?” I went back to that, and the rest was plain sailing. Except for about thirty thousand rewrites and almost one hundred rejections. But these are a writer’s usual problems, or at least they are my usually problems, and finally the book was accepted and published, and here it is. If there is any point to this blog, I suppose it is have faith in a good idea. Or don’t be afraid to change it, if need be. Or something.

I hope you enjoy the book. A lot of torment went into creating it, never mind writing it…

Today, Poppy Orpington is hardly remembered at all. Some do know that she was a famous racing driver, though only a minority of these are aware that her first car was called Thunderbus, not Thunderbolt, a mistake arising from her later company of that name. Others wrongly dismiss her as the first of the modern celebrities, working the media for fame and money, while a few will gleefully recall libellous newspaper reports of harlotry in a Parisian bawdy house whenever her name is mentioned.

Most, however, are familiar only with her stained reputation from the Great War – a reputation, I maintain, that is thoroughly undeserved. However, I must not get ahead of myself. I shall explore everything in the right order and put Poppy in the context of her era. Her exoneration, should you wish to grant it, must be given at the right time and with a full understanding of Poppy’s character.

This, then, is the beginning of the testimony, taken from diaries, letters and personal contemporaneous interviews. Some may complain that my shaping of this material into a narrative rather than an academic account will diminish the authenticity of the work; I contest that Poppy’s biography is so dramatic in tone, and so rich in style, that it pulled itself naturally into this shape.

Nonetheless, a few disclaimers should be noted. Memory is fragile, and it is unsurprising to see the manner in which events can be transposed, altered and generally misunderstood. Please be assured that I have researched all areas as closely as possible and that everything in this book actually took place, though not necessarily in the order given.

Also, the spoken language at that time was rather more formal than today, especially amongst the upper classes and the well-educated, and this has driven me to lightly edit certain conversations between Poppy, Simeon, Helena and their contemporaries. Please be assured that I have endeavoured to keep the pith of each exchange, sacrificing the semi-archaic speech patterns only for the sake of lucidity.

The reader may ask just why I have devoted so much time to the Orpington archive of diaries, letters and more. Does it really matter what happened to an almost forgotten woman over a century ago? In my opinion, and simply put; yes. Poppy’s life has many parallels today, while her eventual fate in the early years of the twentieth century could – tragically – easily happen again. I will accordingly interpose a series of editor’s notes on those aspects of Poppy’s life that I feel are relevant to us. I shall endeavour to keep these interjections to a minimum, however, as they serve to illuminate rather than to distract.

Join me, then, as we travel back to when motor sport was still open to amateurs – albeit only wealthy amateurs – who could race their own cars side-by-side with the professionals of the day. Back when the sport still boasted heroic individuality rather than corporate wrangling over fuel consumption and weight limits. Back when cars were designed by hand and built by imagination, and were as much for the public road as the racetrack, unlike today’s machine-designed racing vehicles that have no function outside the sport and no individuality within it.

So, let us return to an age which is now regarded as a lost era of romance and rugged individualism, but which was also characterised by gross inequality, a rigid social order, casual violence toward women and unthinking submission toward authority. And let us never forget that the past is golden only when viewed from afar.

Jon Hartless was born in the seventies, which is rather long time ago. Full Throttle is his first novel with a traditional publisher. 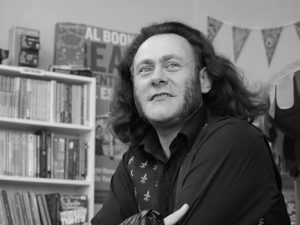 Many thanks Jon, sounds great.

Guest Post from Sonja Price: A Flight of Fancy