I’m am delighted to welcome a new voice to my blog today today. All the way from Canada, the lovely Julie Frayn is answering questions about her hit novel, Mazie Baby. Julie is also giving you the chance to buy her novel at a bargain price!!

Let’s dive in with the first question! 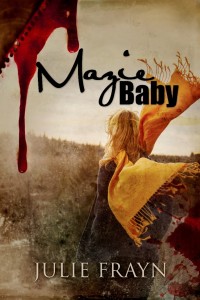 The first inspiration came from a flash of a scene. Just scissors sticking out of a man’s thigh. While I wrote it, the faces of women I know have been abused kept popping into my head, including one woman who was murdered by her husband before he committed suicide. I hadn’t intended to write an abuse victim’s manifesto, but that seems to be how it is being received.

So much research! I read true stories of domestic abuse, studied the stages of abuse, and of grief. There was research into the Canadian legal system. My brother is a police officer, so he was a great resource, and a friend introduced me to a Crown Prosecutor who helped me get the trial details right. I am grateful to them, and to the Google Gods as well.

I write in third person deep POV. Deep means you do away with the ‘he thought’ and ‘she wondered’ and just state their thoughts. You are inside their head, but it’s not first person narrative.

I’m a pantser. I go along for whatever ride my characters take me on.

The honesty with which the tale is told – an ‘unflinching eye,’ as another author has termed it. Also, the enthusiasm with which it is being received. And of course, the cover. My sister, Carolyn Frayn, created the cover while undergoing chemotherapy (for the second time). She made the blood from beet juice and corn syrup, and used my daughter as the model for Mazie. It’s a beautiful, and very personal cover. 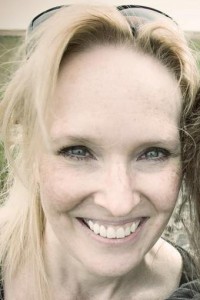 A bean counter by day, Julie revels in the written word. When she is not working or writing, she spends as much time as possible with her two children (grown adults, really), while they still think she’s cool.

Many thanks for coming by today Julie! Great interview. Don’t forget to grab your BARGAIN priced copy of Mazie Baby folks!