This week, I’m delighted to welcome Jan Baynham to Opening Lines, to talk about her debut novel, Her Mother’s Secret.

Over to you, Jan…

‘Her Mother’s Secret’, with its sub-heading of ‘the Summer of ‘69’, is my debut novel. It is the first of three I’ve been contracted to write for Ruby Fiction. All three novels involve secrets and forbidden love, explore mother and daughter relationships and are mainly or partly set in countries other than Britain. ‘Her Mother’s Secret’ was published on April 21st as an ebook and most of it is set on Péfka, a fictional island off the coast of southern Greece. The story opens in 1991when a young Welsh woman, Alexandra Davies, is grieving after the untimely death of her mother. Elin has left her diary to her daughter and on reading it, Alexandra discovers a part of Elin’s life she knew nothing about. She is shocked as the secrets from Elin’s past are revealed and realises she didn’t know her mother as well as she thought. I tried to put myself in Alexandra’s shoes. Having had a very close relationship with her mother, how must she have felt finding out that her mother had kept such secrets from her?

The diary takes us back to 1969. Elin Morgan leaves Wales after finishing art college to spend the summer months studying at a painting school in Greece.  She records everything about her summer on the island but, while there, something happens that causes her to never paint again.  The secrets of that summer remain with her until she dies twenty-two years later.

Alexandra makes her own journey to Greece, following in her mother’s footsteps. She arrives on the same beautiful island that made such an impression on her mother. Once there, she sets about uncovering what really happened to Elin in that summer of ’69 and why it was never mentioned again. Will she understand why her mother closed down that part of her life?

Why Greece? Having had several holidays there now, I first visited the country in the seventies when we stayed with my aunt and Greek uncle. I fell in love with the climate, the vibrancy of the colours of the sea and flowers and the warmth of its people. It seemed to be an ideal place for a young artist to spend her summer. I enjoyed getting to know my Greek characters, some named after or based on people I’ve met and observed on visits over the years. Dimitra, the host at the taverna where Elin stays, is named after a lovely waitress from the hotel we go to in Crete. On a trip to a Cretan village, I watched a woodturner working at his lathe on pieces of olive wood and he became the inspiration for Yiannis who figures largely in Alexandra’s story. Vassilis is named after an elderly Greek who led me onto a taverna dance floor. He tried to teach me traditional dancing and had the bruised toes to prove it! He appears in both Elin’s and Alexandra’s story. I hope I’ve done justice to the country and its people by giving the reader a glimpse of life on my fictional island.

It’s 1969 and free-spirited artist Elin Morgan has left Wales for a sun-drenched Greek island. As she makes new friends and enjoys the laidback lifestyle, she writes all about it in her diary. But Elin’s carefree summer of love doesn’t last long, and her island experience ultimately leaves her with a shocking secret …

Twenty-two years later, Elin’s daughter Alexandra has inherited the diary and is reeling from its revelations. The discovery compels Alexandra to make her own journey to the same island, following in her mother’s footsteps. Once there, she sets about uncovering what really happened to Elin in that summer of ’69. 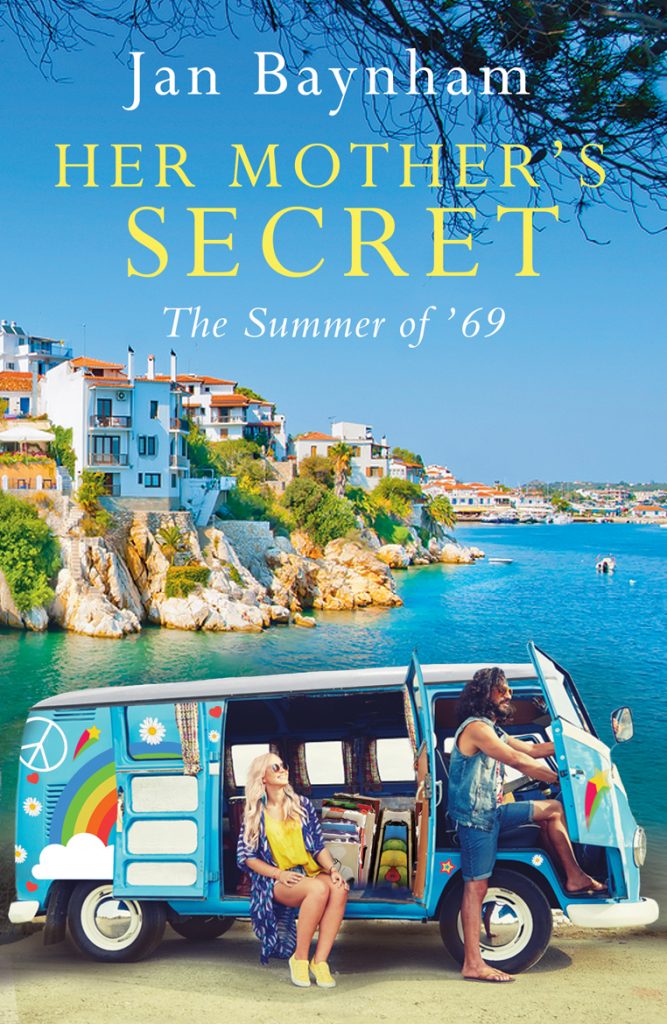 Sofia Simonides let out a scream and tottered backwards. Her pulse struggled to force blood around her veins. The body was slumped against the gnarled trunk of an ancient olive tree, head hanging to one side and resting on the left shoulder.

The man had a blue-grey pallor, his skin a candle-wax translucency. Sofia bent over and touched his cheek. It was icy cold; she gasped, drawing back her hand. Blood from a gash on one wrist had seeped over his thigh and there was a deep red stain in the sand. A long-bladed knife caked in dried blood lay by his side. Sofia eased out the piece of paper he clutched in one fist, unfolded it and read the message.

Falling to her knees, she sobbed.

A piercing howl from deep inside her shattered the cool, still air of the dawn.

1991, A market town in the heart of rural mid-Wales
The sky was lead-grey, heavy with blue-black rain clouds threatening a downpour. The dreariness of the day reflected my mood as I turned the Mini into the cul-de-sac. A shiny red two-seater was parked in the drive behind my father’s Audi. I pulled up alongside the kerb, took a deep breath, trying to avoid a downpour of my own, and entered the house. There was laughter coming from the kitchen.

My father and his friend turned to face me. His mouth gaped open.

‘Alexandra. Apologise, straight away. Sally, I’m very sorry. She has no right to speak to you like that.’

‘It’s all right, Richard. Alexandra’s upset. I’ll go now. The food’s almost done, anyway. You just need to serve it straight from the oven once the timer rings. Shall I call Claire down on my way out?’

I glared at the woman who stood there taking off Mam’s apron. My heart quickened. Mam? My mind was playing tricks on me. It wasn’t Mam, was it? She should be the one standing there, greeting me, cooking dinner. Not her. I struggled to breathe. How dare she? How dare he?

My father accompanied Sally outside, and I heard the throaty roar of the sports car signal that she’d gone. I braced myself for the row that would ensue, but I wasn’t being unreasonable, was I?

Claire entered the kitchen first. She was four years younger than me, tall and slim with long auburn hair and sage-green eyes. She took after my father’s side of the family. He idolised her.

‘What was all that about and where’s Sally?’ she said.

By then, my father had joined us and they both stared at me. ‘Well?’

‘That woman’s here all the time, wheedling her way in. She’s even taken to wearing Mam’s things.’ I twisted the cotton apron into a ball in my hands and heard my voice rise.

‘Her Mother’s Secret’ is available on Amazon: 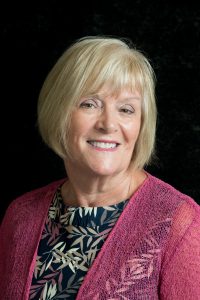 Originally from mid-Wales, Jan lives in Cardiff with her husband. Having joined the Romantic Novelists Association in 2016, she values the friendship and support from other members and regularly attends conferences, workshops, talks and get togethers. She is co-organiser of her local RNA Chapter and a member of the Society of Authors.