I’m delighted to welcome Tim Walker back to my blog today, with the Opening Lines from the latest novel in his A Light in the Dark Ages series, Arthur Rex Brittonum.

From the decay of post-Roman Britain, Arthur seeks to unite a troubled land

Arthur Rex Brittonum (‘King of the Britons’) is an action-packed telling of the King Arthur story rooted in historical accounts that predate the familiar Camelot legend.

Britain in the early sixth century has reverted to tribal lands, where chiefs settle old scores with neighbours whilst eyeing with trepidation the invaders who menace the shore in search of plunder and settlement.

Arthur, only son of the late King Uther, has been crowned King of the Britons by the northern chiefs and must now persuade their counterparts in the south and west to embrace him. Will his bid to lead their combined army against the Saxon threat succeed? He arrives in Powys buoyed by popular acclaim at home, a king, husband and father – but can he sustain his efforts in unfamiliar territory? It is a treacherous and winding road that ultimately leads him to a winner-takes-all clash at the citadel of Mount Badon.

Tim Walker’s Arthur Rex Brittonum picks up the thread from the earlier life of Arthur in 2019’s Arthur Dux Bellorum, but it can be read as a standalone novel.

Fans of Bernard Cornwell, Conn Iggulden and Mathew Harffy will enjoy Walker’s A Light in the Dark Ages series and its newest addition – Arthur Rex Brittonum. 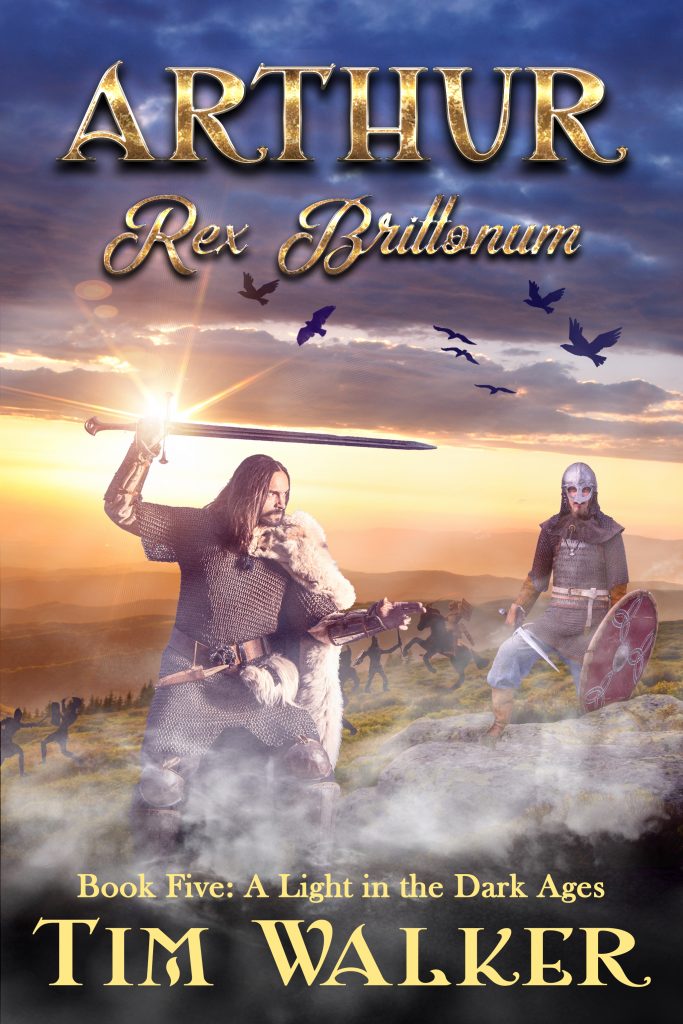 “Pull harder you wretches!” bellowed the captain, turning his warty head away from the pursuing ships to urge his crew to greater effort, gnarled hands gripping the tiller so firmly his knuckles shone white in the gloom. Low grey clouds scudded overhead, driven on by strong westerly gusts that blew into the lone sail intermittently, like puffs of air from bellows feeding a fire. Soft rain slanted across the faces of the desperate crew and passengers on the deck of the thirty-foot merchant rig, its eight oarsmen dashing their oars into the choppy green of the Hibernian Sea as angry whitecaps pointed the way to the green and grey shorelines rising before them.

“Row for your lives, the western savages are gaining on us!” Random words were snatched away by the fitful rage of Manannan, the dread god of sailors, who inhabited the narrow sea between Britannia’s western coast and the land of Hibernia. It was across these waters that wild tribesmen habitually raided the comparatively wealthy and orderly Britannia, now left unguarded following Rome’s withdrawal.

A cluster of six passengers huddled beside the burly captain at the stern, holding onto ropes or the side rail as their ship rolled in the waves that carried them to shore. Those who had voided their guts on deck or over the side turned pale faces to see the three black sails gaining on them through the gathering storm.

Barinthus clasped the charm around his neck and muttered a prayer to Fortuna. “I shall sacrifice the finest kid I can find in your temple at Deva, should you see fit to deliver us there in safety.”

The well-fed Armorican had chartered the ship in the port of Dinan on the northwest coast of what had once been Roman Gaul and was transporting his cargo of fine wines, jars of olive oil, rolls of silk and linen, and some live quails in crates to sell to the nobles of western Britannia. He pulled the fox fur collar of his cloak tighter against the rain and looked down at his sodden calf leather boots, then to the crates of squawking birds that slid from side to side across the deck of the lurching vessel, noting their clucks of displeasure at every roll and shower of sea spray.

“I fear they will soon be upon us!” he yelled at the captain, who fixed him with a filthy look that spoke of regret at accepting the charter. “I have outrun many Frankish pirates around the rocky bays of Armorica where I know the reefs, but these waters are unknown to me. Let us hope we make beach before the rocks rip out our keel.”

They were now in surf that sent rows of churning white-capped waves, like advancing lines of ghostly shield men, towards a shore that revealed itself as a shingle beach before towering pock-marked cliffs. The shrill cries of gulls seemed to foretell their impending doom as the roar of waves breaking on the beach…

You can buy Arthur Rex Brittonum from all good retailers, including- 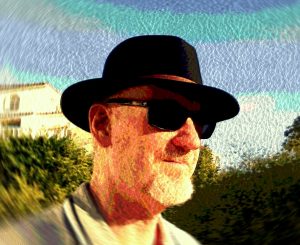 Tim Walker is an independent author living near Windsor in the UK. He grew up in Liverpool where he began his working life as a trainee reporter on a local newspaper. He then studied for and attained a degree in Communication studies and moved to London where he worked in the newspaper publishing industry for ten years before relocating to Zambia where, following a period of voluntary work with VSO, he set up his own marketing and publishing business.

His creative writing journey began in earnest in 2013, as a therapeutic activity whilst undergoing and recovering from cancer treatment. He began writing an historical fiction series, A Light in the Dark Ages, in 2014, following a visit to the near-by site of a former Roman town. The aim of the series is to connect the end of Roman Britain to elements of the Arthurian legend, presenting an imagined history of Britain in the fifth and early sixth centuries.

His new book, published in June 2020, is Arthur, Rex Brittonum, a re-imagining of the story of King Arthur (book five in the series). It follows on from 2019’s Arthur Dux Bellorum, the story of young Arthur (book four in the series), that received recognition from two sources in 2019 – One Stop Fiction Book of the Month in April, and an honourable mention in the Coffee Pot Book Club Book of the Year (Historical Fiction) Awards. The series starts with Abandoned (second edition, 2018); followed by Ambrosius: Last of the Romans (2017); and book three, Uther’s Destiny (2018). Series book covers are designed by Canadian graphic artist, Cathy Walker. Tim is self-published under his brand name, timwalkerwrites.

Tim has also written two books of short stories, Thames Valley Tales (2015), and Postcards from London (2017); a dystopian thriller, Devil Gate Dawn (2016); Perverse (verse and short fiction, 2020); and two children’s books, co-authored with his daughter, Cathy – The Adventures of Charly Holmes (2017) and Charly & The Superheroes (2018) with a third in the pipeline – Charly in Space.

Find out more about the author at – http://www.timwalkerwrites.co.uk